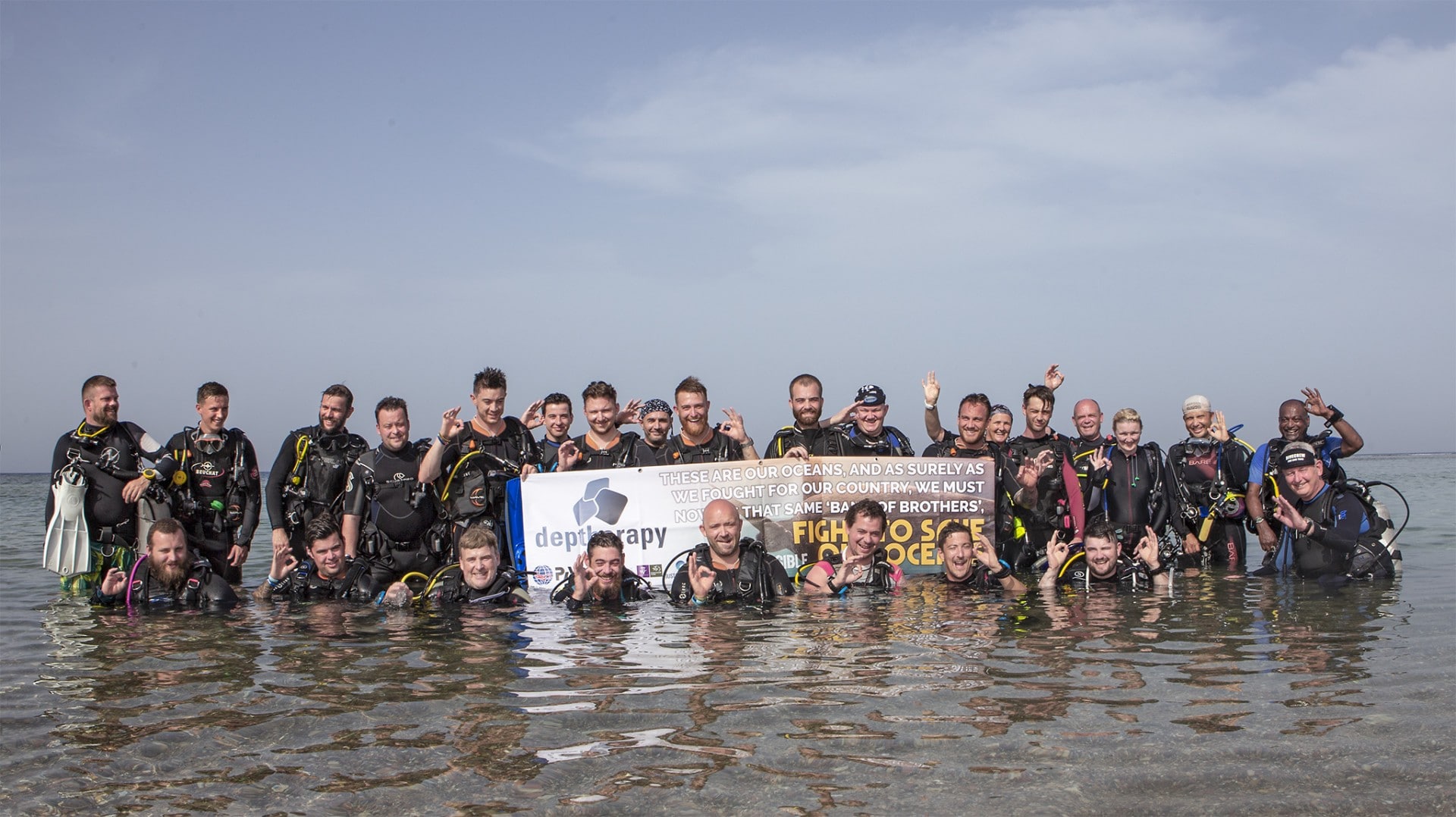 At the end of May 2018, UK scuba diving rehabilitation charity Deptherapy held it’s largest ever expedition to the Egyptian Red Sea. A team of 25, including 17 wounded in service veterans, all suffering from life changing physical and / or mental injuries, travelled to Roots Dive Camp in El Quseir as part of Team Deptherapy.

The expedition also marked the beginning of Deptherapy’s ‘Protecting Our Oceans’ project – an ongoing campaign to raise awareness of the fragility of the world’s oceans, ensuring that each Deptherapy Programme Member ‘gives back’ to the marine environment that has so helped in their rehabilitation.

During the expedition, all Programme Members took part in a ‘Dive Against Debris’ underwater and beach clean up, successfully removing over 1 kilometre of entangled fishing line. 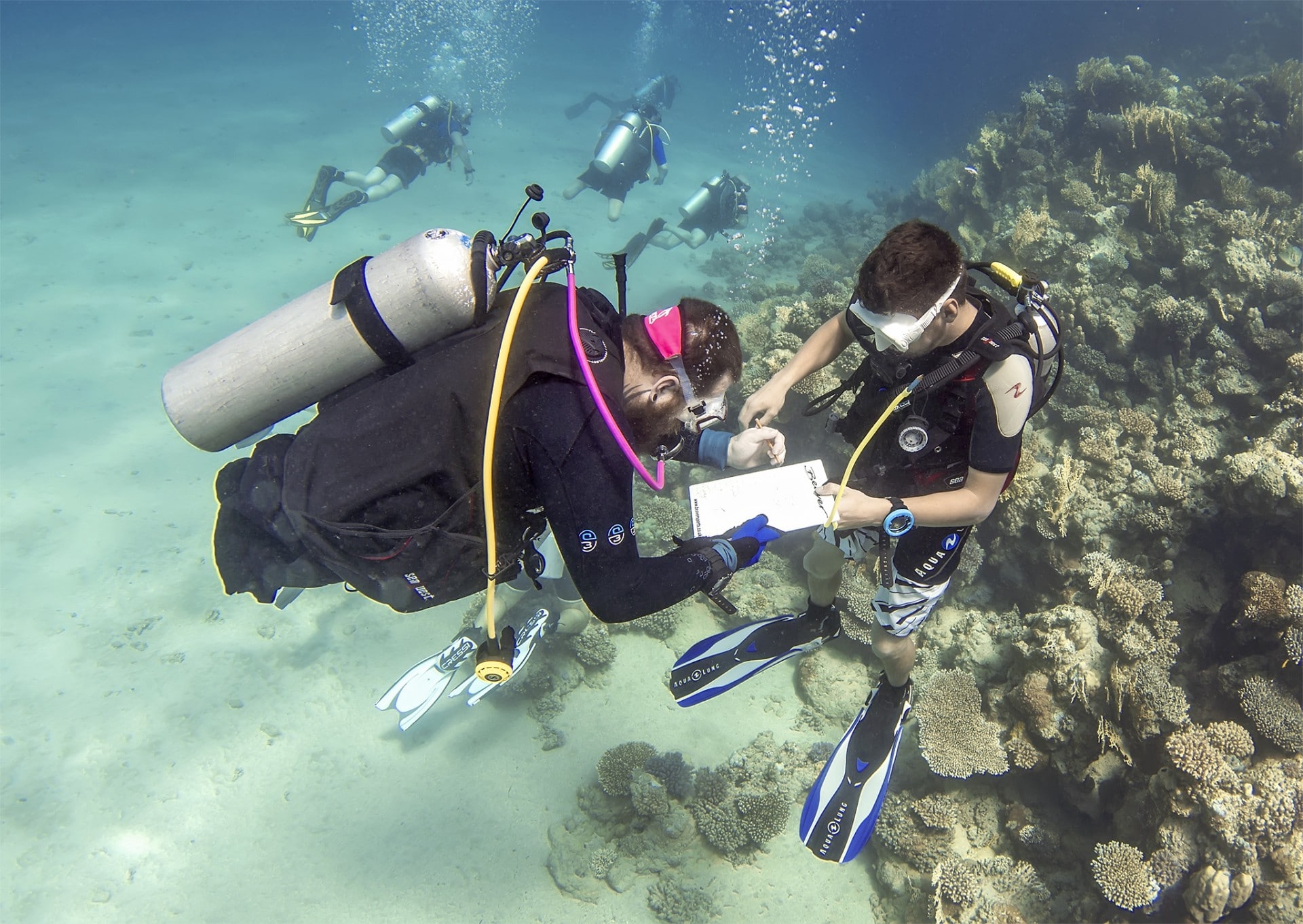 Seven of the Programme Members also undertook a coral reef surveying and conservation course, led by Tom Dallison, Head of Science at Coral Cay Conservation. The aim of the five-day course was to develop skills in underwater environmental survey techniques and species identification, in order to prepare the divers for an expedition to Truk Lagoon this August.

“Deptherapy’s Protecting Our Oceans project now has seven passionate and knowledgeable ambassadors. In times where the future of our coral reefs and Oceans can look bleak, the efforts taken by environmental stewards, and the wider public, to actively protect these systems are critical. With an increased affinity to the marine world and a new perspective on the complexity and beauty of coral reefs, those heading to Truk are in good hands. I am truly grateful for the week spent with the Deptherapy team. I wish them all the best for the future and have no doubt that they will triumph in Truk Lagoon.” 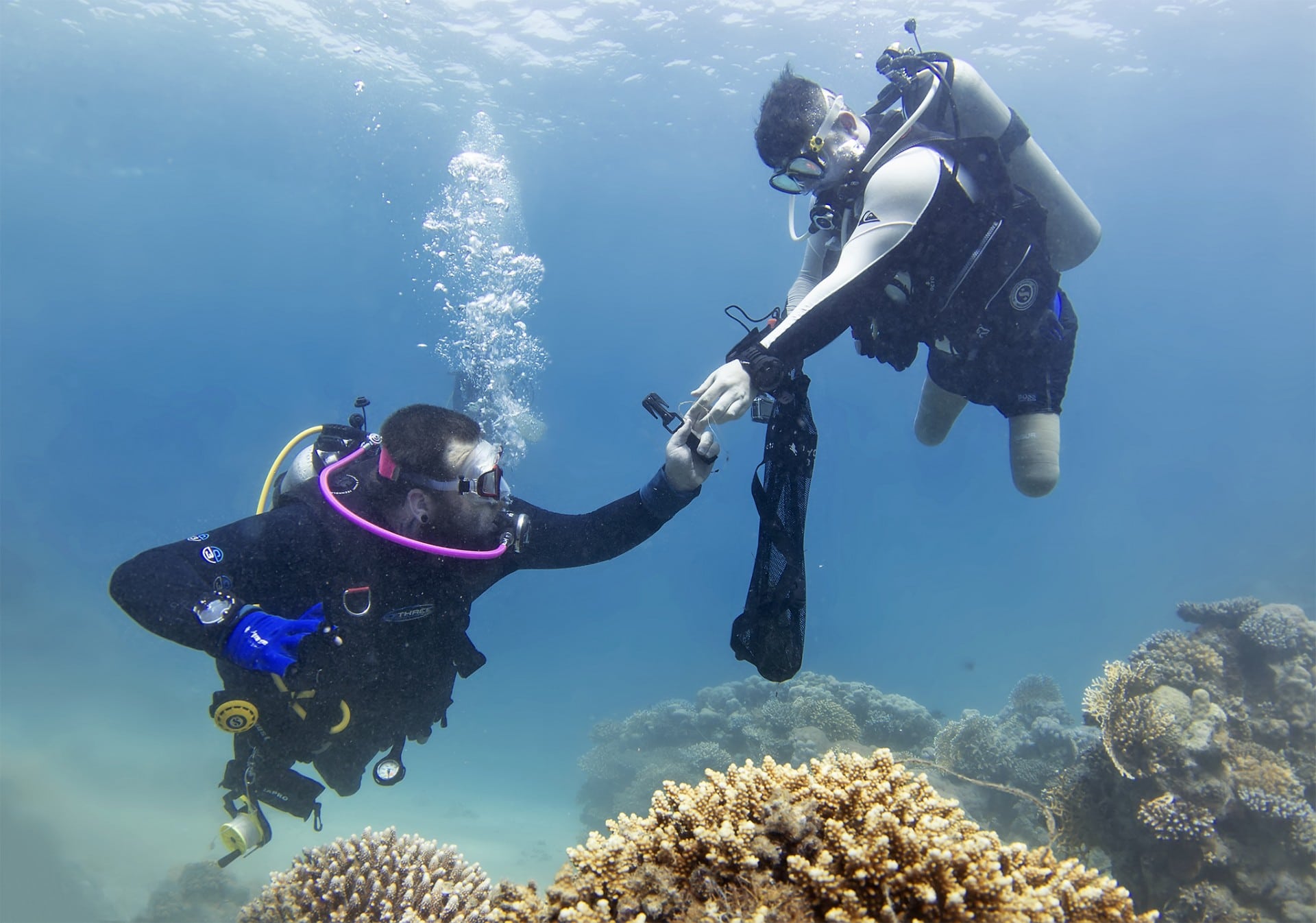 The charity is now focusing on the build up to the Truk Lagoon expedition, which will take place from 3rd to 17th August 2018. This major expedition is funded by the Chancellor of the Exchequer’s 2016 Libor Fund.

Ben Lee is already working with other expedition members to formulate the plan for mapping the wreck of the former Naval Tanker, the Shinkoku Maru, in what will be a key environmental exercise and the next stage in the Protecting Our Oceans project.

With applications for places on the Deptherapy Programme at an unprecedented high, the charity also intends to undertake a further expedition to the Red Sea in October 2018.

Do you know… it costs £1500 to fund a wounded in service veteran on a PADI Open Water course on the Deptherapy Programme. Deptherapy’s life changing work can only continue if they raise enough funds. The charity receives at least two applications every week from British Armed Forces veterans who would benefit from their Programme. Please help Deptherapy continue to make a difference to their lives. Pledge your support and find out more about Deptherapy & Deptherapy Education at www.deptherapy.co.uk.

And the winner of our Cressi Calibro Mask Competition is…

Are you ready for your next course? 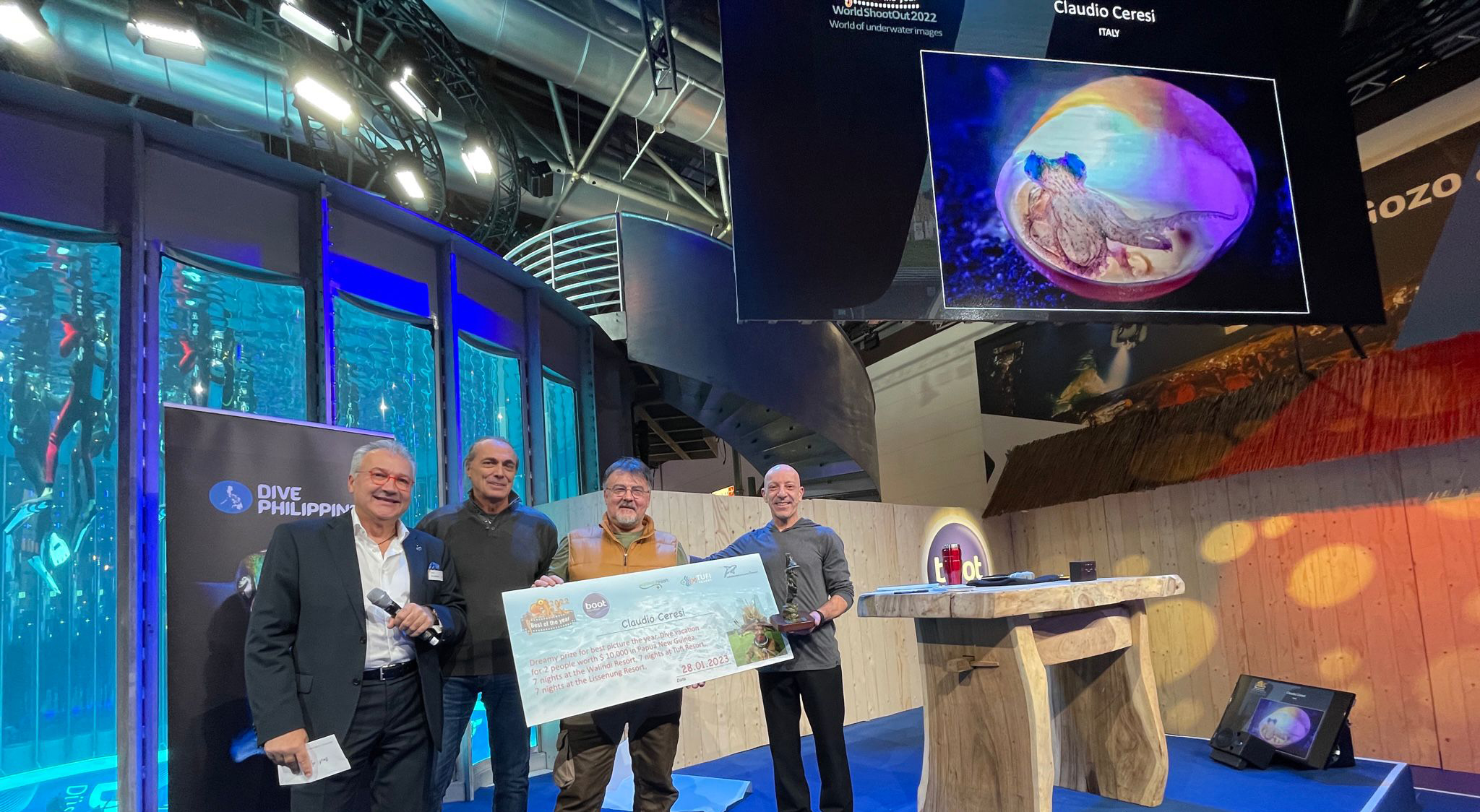 The World Shootout winners were announced at this years returning Boot show.

Producer David Pilosof initiated the first World ShootOut online competition in 2011, breaking all boundaries and introducing an international competition as never produced before.
Hundreds of photographers from around 40 countries around the world take part in the World ShootOut competition year after year, submitting thousands of images and videos, ranging from those that capture the calm lakes of the Nordic countries and Canada, showcase the exotic secrets hidden in Alaska and introduce the great dramatic white shark in the Gulf of Mexico.

Claudio Ceresi from Italy won the top valuable prize for best picture of the year $10,000 worth of 3 weeks diving vacation for 2 people, in Papua New Guinea. 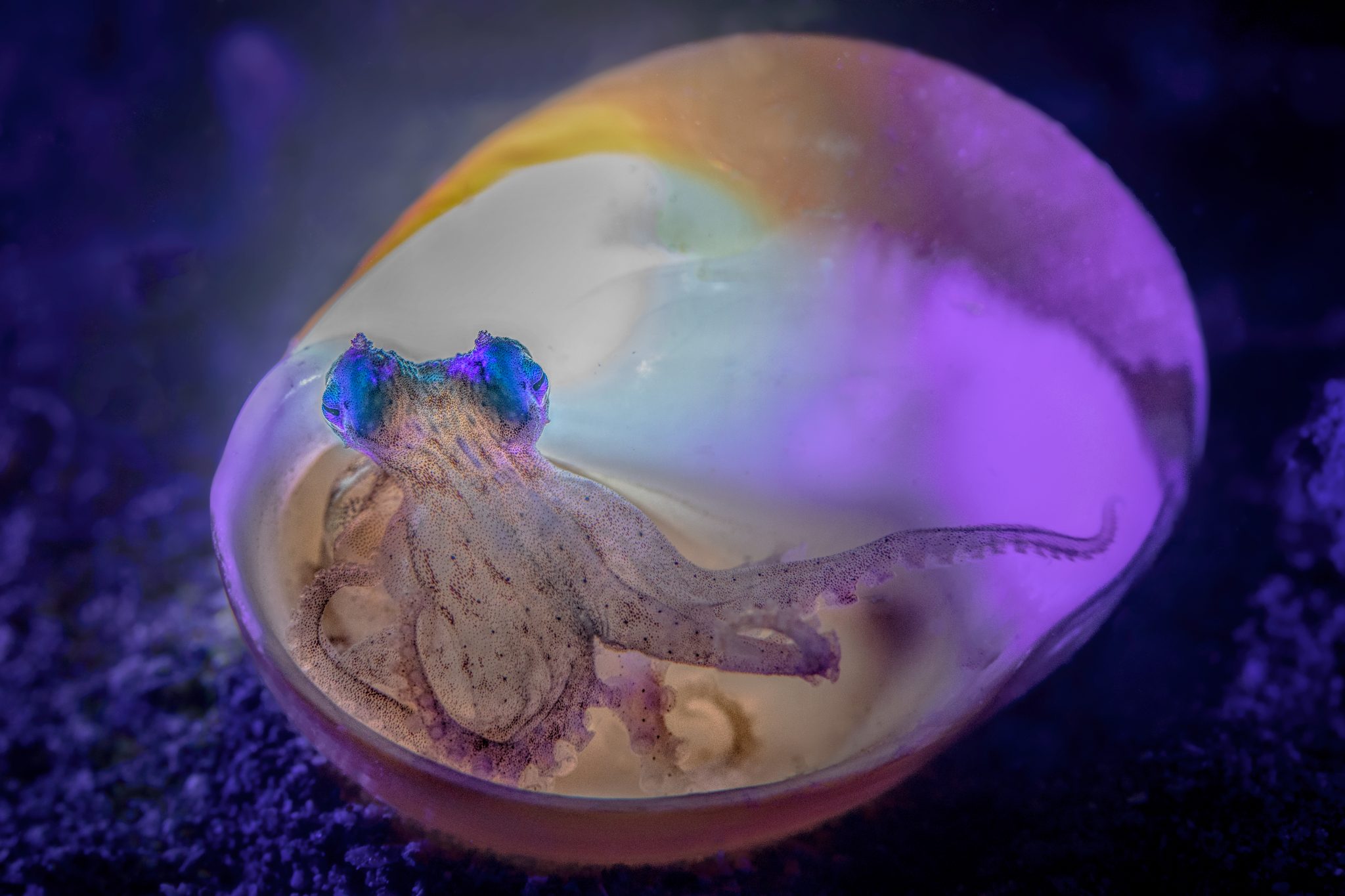 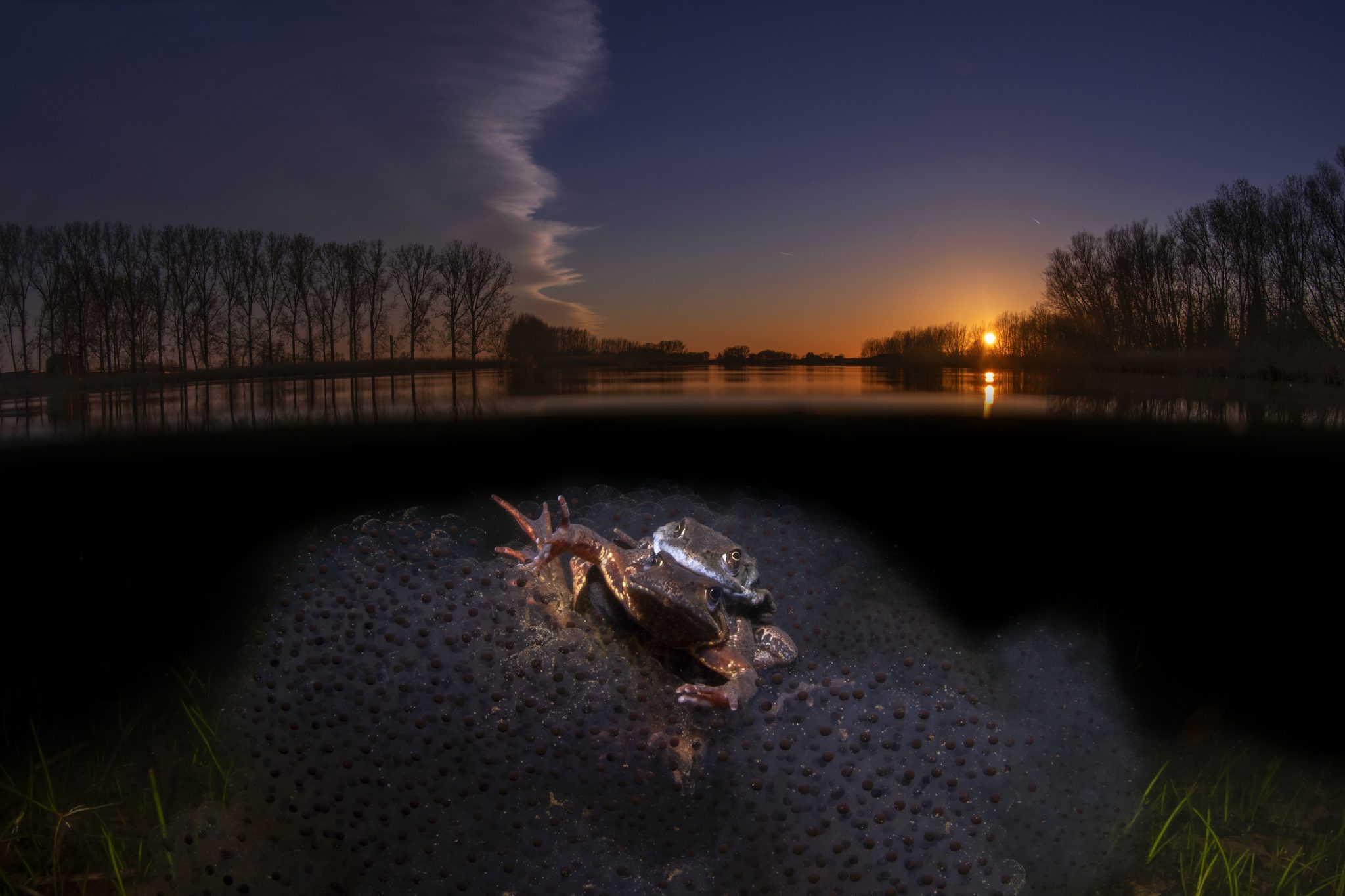 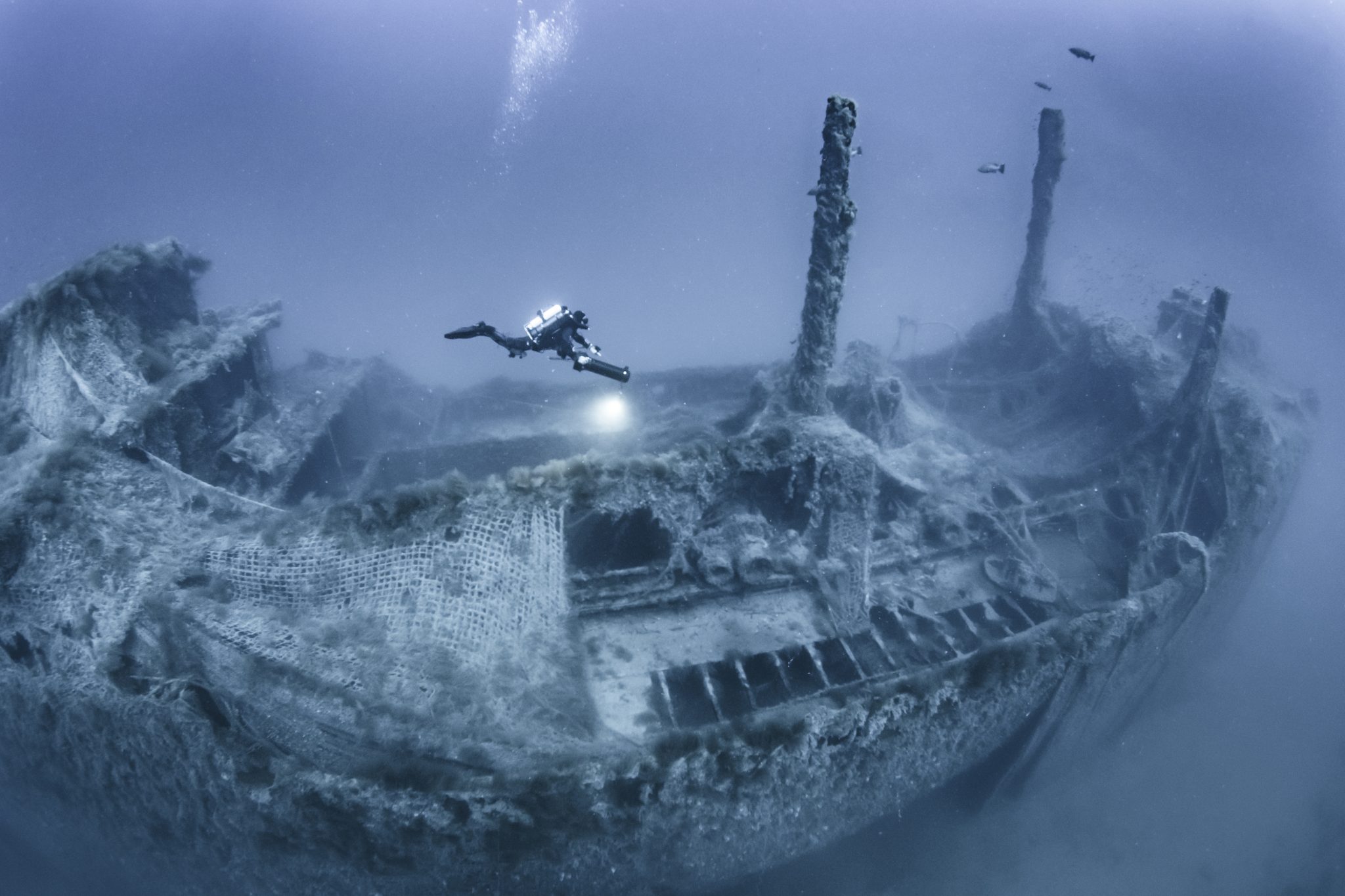 Wrecks of the World Winner by Stella Del Curto 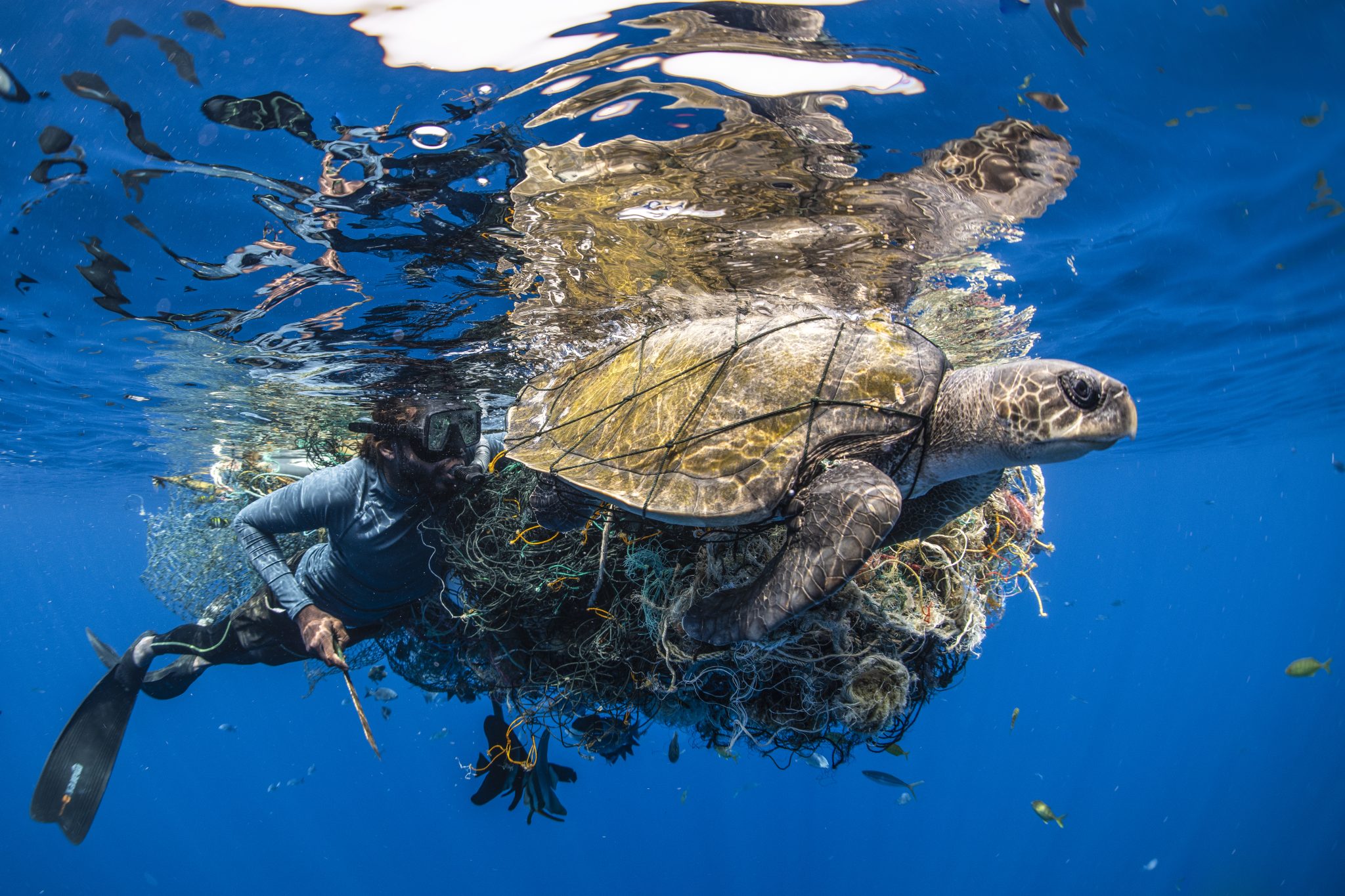 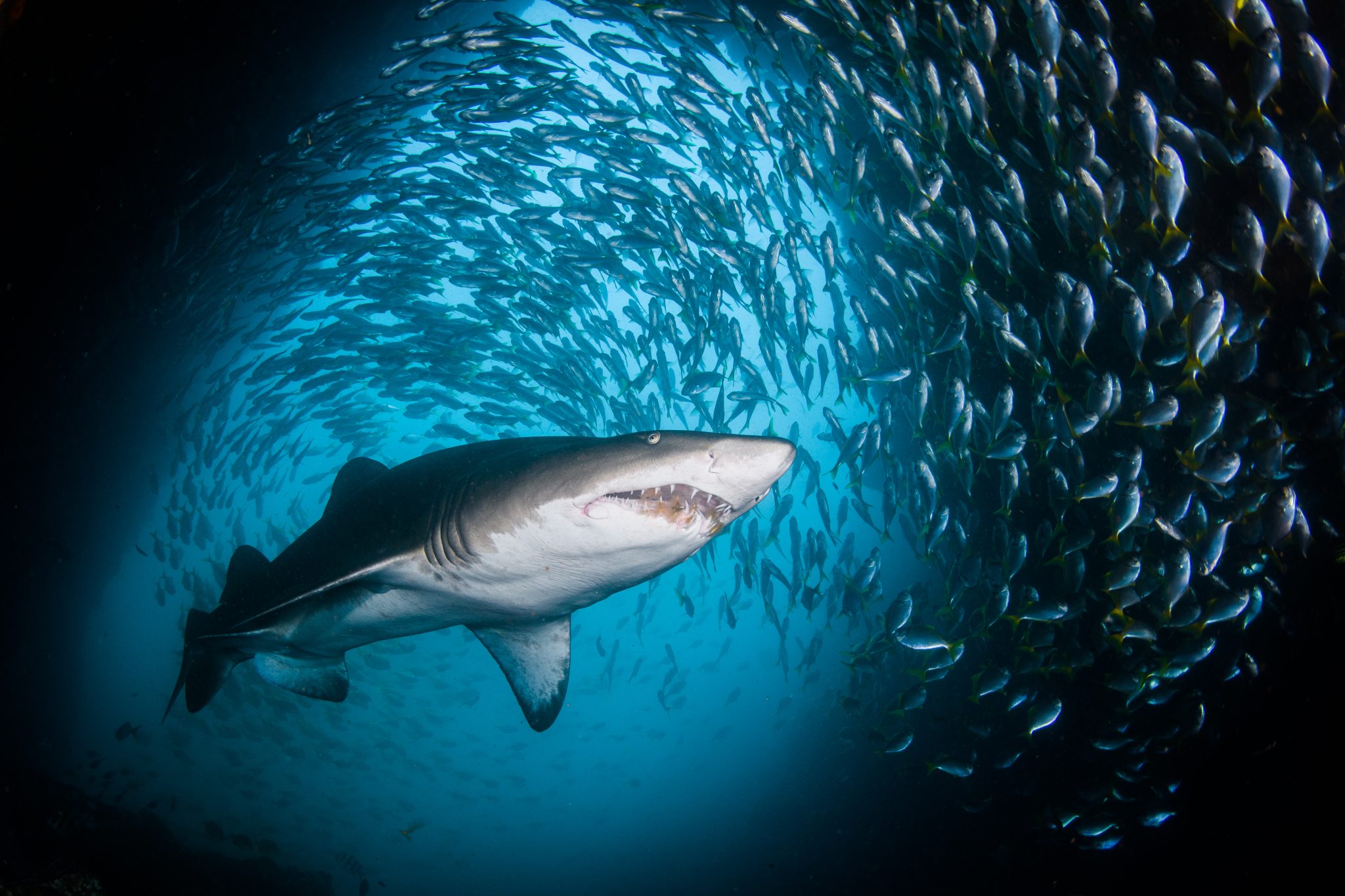 Sharks of the World Winner by Nicolas Remy

The winning video can be seen here:

We have featured a few of the category winners in the gallery above. To see all the images placed in this competition, visit the World Shootout Website 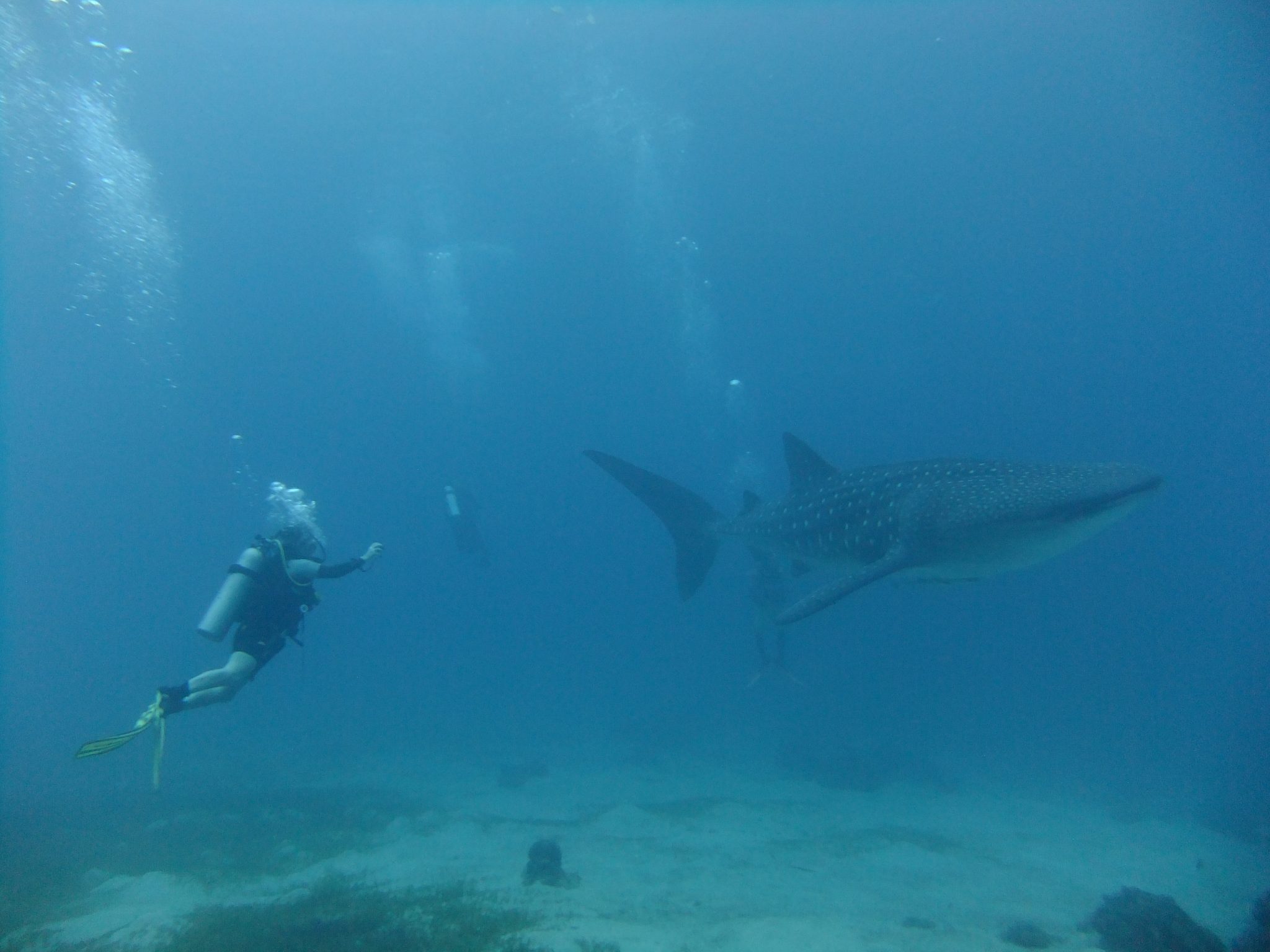 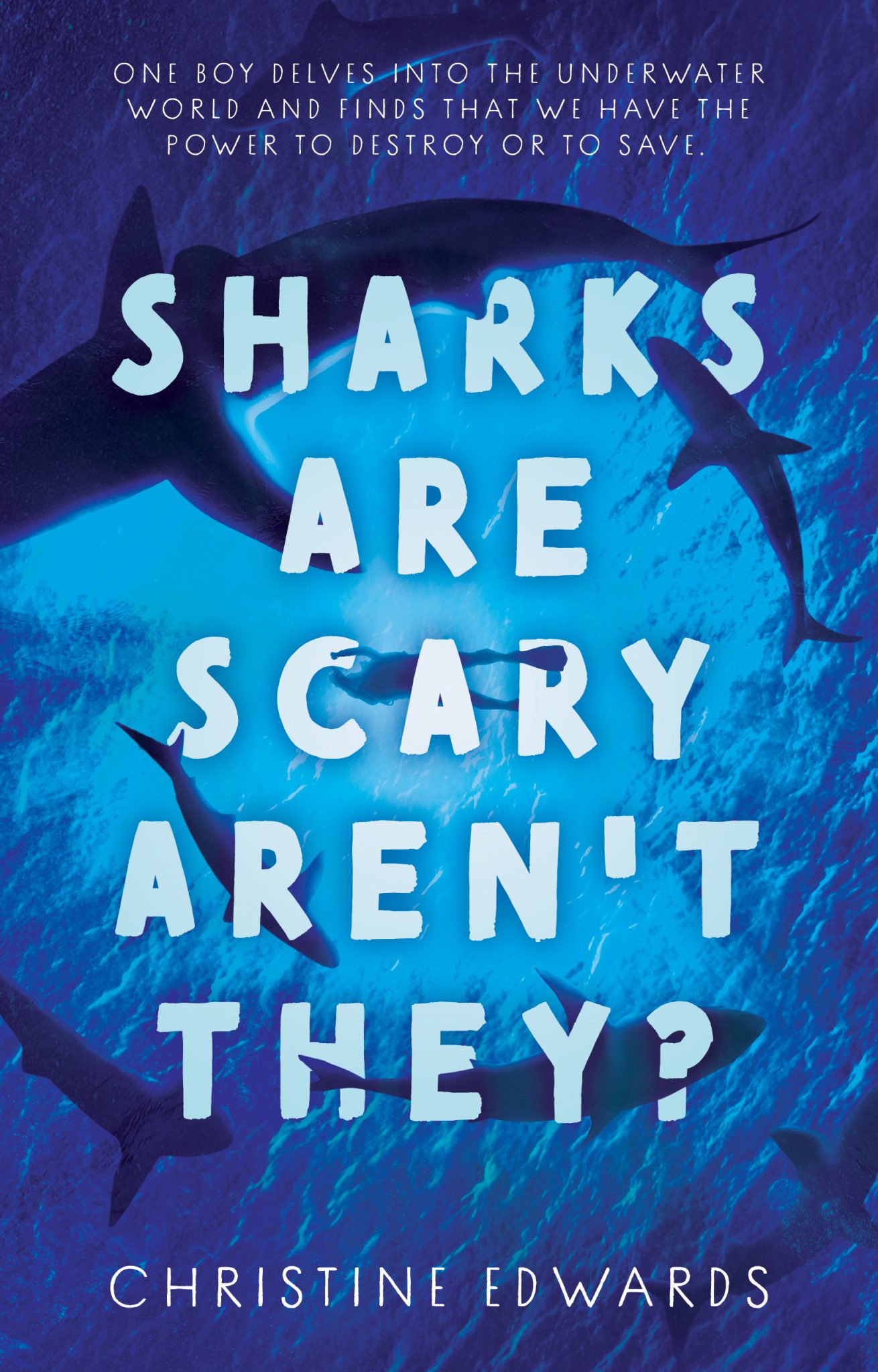 A new book by experienced diver Christine Edwards has just been published, which aims to inspire children and young people to better understand sharks and become advocates for ocean and environmental protection.

Sharks Are Scary Aren’t They? tackles themes such as the human impact on the environment and the protection of sharks and their habitats. The story depicts the emotional journey of Charlie Parker, a fearful twelve-year-old boy, and Jane Jones, a retired dentist and scuba diver, who meet by chance on a beach. Despite the years that separate them, they discover they are more alike than they could have imagined.

Sharing the world through the eyes of sharks, hearing about the struggles and dangers they face and how they are on the brink of extinction, brings the two friends closer together. In this book there are stories of shark encounters, the majesty of the underwater world and how the impact of human activity and plastic pollution is affecting their habitat. Most of all, the two characters learn about the power of the human spirit to change in the face of adversity.

Author Christine Edwards was born in Chester in 1962. She read psychology at Warwick University, then worked as a teacher for twenty years. In 2004 she trained at Birmingham Theatre School to become an actor. As a teenager Christine feared the sea and the sharks that swam there. After trying a scuba dive in 2006 and making 1,200 dives around the globe, everything changed. She now adores sharks, hence writing this book.

Christine says: “Conquering a deep rooted fear of the sea and terrified of the sharks that roamed there, I made the astonishing decision to try a scuba dive in 2006. The moment I sank beneath the waves and glimpsed at the world below the surface, I was well and truly hooked. Since that first plunge underwater, I have accomplished over 1200 dives in seas and oceans around the globe. My fear of sharks has turned into a passion for them. Whenever I would describe my shark encounters to friends or family they invariably expressed concern and questioned why anyone would dive with such a dangerous species.”

Christine continues: “My book came out of the need to redress the balance for this wonderful fish. Sharks have existed for 450 million years, well before the dinosaurs, and still exist today. They are being hunted and cruelly killed for their fins and are probably one of the most misunderstood creatures on our planet. The knock-on effect of their demise will be catastrophic. Oceans without sharks will cause negative changes to other species – without this apex predator keeping other fish in check, our coastlines and reefs will ultimately suffer. The oceans need sharks!”

The paperback of Sharks Are Scary Aren’t They? (ISBN  9781915352613) is out now and was published on 28th January 2023 by The Book Guild, an imprint of Troubador Publishing Ltd. Priced £8.99, the book is available from https://bookguild.co.uk/bookshop/ as well as at bookshops and through Amazon and other retailers.

Check back for our review of Sharks Are Scary Aren’t They? soon!