With the mass destruction of coral reefs around the world due to climate change, destructive fishing methods, irresponsible boat anchoring, pollution or just careless divers, the short of it is, we are loosing a significant percentage of reef every year. There are many facts and figures on many different web sites, all putting some sort of spin on what we have lost and what we are about to loose in the future. Whatever the figures, the fact remains that we are loosing a unique and incredible part of this world’s ecosystem. I’m not just being sentimental here; the World Meteorological Organization says that tropical coral reefs yield more than US$30 billion annually in global goods and services, such as coastline protection, tourism and food. 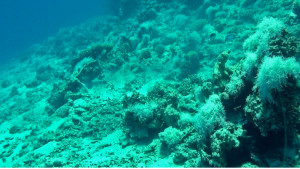 As divers, many of us have seen the loss ourselves, returning to areas we visited years previously, only to find the coral dying or dead and not a fish in sight except perhaps for the lonely few.

There are people in the world taking a positive stance against this who are not only contributing greatly to the growth of new reefs but also helping people, locals and visitors, to feel some sense of ownership and take part in the saving of our seas.

This, on the face of it, is good news, but let’s not fall into the trap of thinking that when it all goes pear shaped we can simply re-build. We can’t. This article is about restoration, not creation. 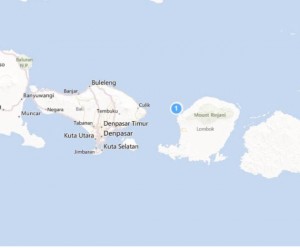 The trust was created in 2001 by the dive shops on Gili Trawangan to support SATGAS, an association of local security which was struggling against dynamite and cyanide fishing and its disastrous effects on the coral reefs.

However, because of all the factors of destruction that touch coral, protecting the reefs is not enough. In 2004 the Gili Eco Trust launched its cutting-edge Coral Reefs Restoration Program based on the BioRock technology.

BioRock technology relies on a very simple principle: reproduction by electrolysis of the natural reaction occurring between coral, sea water, the sun and dissolved minerals. A metal structure is installed on the ocean floor. A low voltage electric current, which is totally harmless for any organism, is passed through the structure and leads to electrolysis, causing a calcareous precipitation on the whole structure. This not only avoids the unwanted appearance of rust which would weaken the structure, but, as coral’s skeleton is made of calcium, the structure will, thanks to this reaction, become a favourable base upon which coral may develop.

Loose corals are then manually attached to the structure and typically grow 2 to 6 times faster than usual and are more resistant than under normal conditions, allowing the ecosystem to replenish itself and develop. The corals that are attached come from reefs in the surrounding area that were broken for various reasons such as unaware divers, strong waves or dropped anchors. 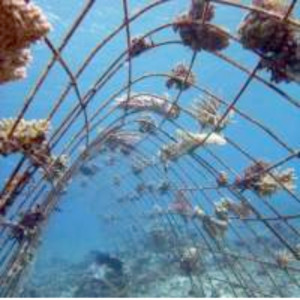 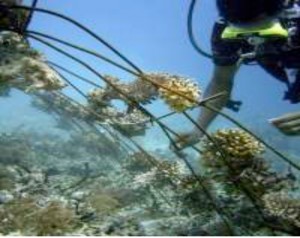 BioRock technology’s electrolysis is catalysis of the natural reaction and not only a simple reproduction, as this electrolysis enables a coral’s development to be 2 to 6 times faster than in usual conditions. Normally coral grows only a few centimeters per year and so quicker growth is an efficient way to restore reefs. Moreover coral on BioRock structures grows stronger and is more resistant to the hazards it faces.

Delphine Robbe, from France, is a Gili Eco Trust Coordinator. This is her blog. 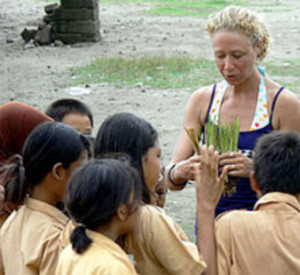 This was the 4th BioRock workshop I had organized and I was feeling a bit stressed out. Not as usual with a coming workshop, stressing about the organization of the event, but because my new born son was only 2 months old and I didn’t know how I would be able to manage a baby and a workshop at the same time. Evan is now my new priority, just before Coral Reefs and my job as Gili Eco Trust Coordinator.

I organize BioRock workshops every 2 years. The last one in 2010 was a great success, but how tiring it was for me to run around, organizing day by day all the activities for the 78 participants. Welding BioRock structures, sinking them, catching up on construction when participants are listening to Tom Goreau’s Lectures lectures, getting the program done for every day jobs that the participants are doing, making sure every group learns the same and have a look at all the different maintenance and construction jobs that BioRock involves…etc

How would I deal with all of that with Evan who needs me for feeding and mainly for love to grow up peacefully? For once I asked for HELP and I delegated! So many people, friends and family had been telling me that I should get some help, delegate and in doing so minimize my stress input, so I finally did it and learned from it! I nominated 12 team leaders to take the 4 teams of BioRock participants into all the activities, I supervised most of the construction but I mostly told the team leaders every night what they were supposed to do the next day. I set the program up for each day and went to give main briefings to the teams going diving, but I was not there all the time and everywhere. I did the first 2 days for all registration, payments and dealing with all the officials and everyone’s bookings. Then I would go there with Evan to set the program up and brief the team leaders. And yes everyone learned everything that they were supposed to learn during that workshop and only positive feedbacks came to us.

The head of the 3 Gili Islands opened the workshop, along with Pak Yes, Head of the Marine Affairs and Fisheries Department from Kupang, Nusa Tenggara. Bapak Arifin Bakti, lecturer at Mataram University (UNRAM) also gave a speech of introduction and I introduced everyone with the program of activities that will be done during this workshop week. 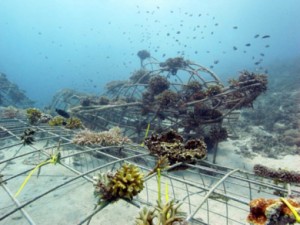 The youth association of Gili Trawangan and the staff of the BKKPN office for Gili Matra, Marine Protected Area, were presented to all participants as the future of the Gili Islands. An uncertain future, as it is difficult to balance tourism and environment protection, but some from local communities want to push towards Eco tourism and coral reef protection and restoration.

More than 83 people participated in the Workshop, including a wide range of divers, students, conservationists, scientists, engineers, artists, doctors, and lawyers from all over the world.

As usual, a good majority was from Indonesia. They included more than 10 students in Marine Science, Biology, and Fisheries at Mataram University, Lombok, all of who were trained as divers for the workshop. All of them are planning BioRock related research projects. There were also participants from Bali, Java, Sulawesi, and other islands.

Local people from Gili Trawangan island came to learn about the Biorock technology that they have seen installed around their island over the last 8 years; members of the island Youth Association “Remaja, Karang Taruna”, SATGAS (community ocean patrol that prevents fishing with bombs and poisons, and anchoring in restricted zones), staff from all Gili Trawangan Diveshops, locals and westerners.

Students learned all aspects of BioRock® Technology theory and practice, including the fundamental physics, electrical engineering, mechanical engineering, chemistry, and biology, along with hands-on training in design, construction, installation, monitoring, maintenance, and repair. They saw documentary films and heard lectures on the latest developments in marine ecosystem restoration. They saw the dramatic growth of corals and fish populations on BioRock reefs ranging in age from 0 to 8 years, and the BioRock shore protection projects that are growing back beaches on the north end of the island that had been severely eroding.

13 new BioRock reefs were designed, built, installed, and planted with corals by the students, bringing the total of BioRock reefs at Gili Trawangan up to nearly 78. These are located in front of dive shops, restaurants, and hotels of Gili Trawangan. The total Gili reef restoration structure is now a whole dive site and many spots for snorkelling where tourists can enjoy observing BioRock structures and their inhabitants. The BioRock projects at Gili Trawangan now rival the Karang Lestari BioRock project in Pemuteran, Bali as the world’s largest and most spectacularly successful coral reef restoration project.

BioRock is the only method that increases coral growth rate and resistance to environmental stress, so BioRock reef corals bleach less, recover faster, and have higher survival from global warming-caused heat stroke. This course came at a very critical juncture, because 2012 is the hottest year in history, and severe coral bleaching took place across the entire Indian Ocean, South East Asia, the West Pacific, Persian Gulf, and Caribbean this year, including Lombok.

Water temperatures throughout Indonesia and many of the most important coral reefs in the world, now remain several degrees warmer than average, and will start to bleach in the next few months if this continues. If it is as severe as is expected, only places with BioRock Coral Arks will have much coral, fish, and beaches afterwards.

BioRock graduates are now trained to restore coral reefs and fisheries, and grow back severely eroding beaches. They can apply these skills as soon as local communities, government policy makers, and international funding agencies recognize the critically urgent need to restore rapidly vanishing coral reefs and the fisheries, shore protection, tourism, and biodiversity services they provide over 100 countries, before they vanish.

Only those with proper BioRock training have the knowledge and skills to implement new projects, and will receive full support with advice, advanced training, and materials needed to start new projects designed to save marine ecosystems from the runaway effects of global warming, global sea level rise, pollution, and unsustainable over-exploitation.

(You can learn more about BioRock at www.giliecotrust.com)