As is often the case, we, human beings, find paradise and then proceed to systematically change it in the name of entertainment. We chip away at perfect and pristine ecosystems until they become unrecognisable. Then we pave them over and look for new destinations. Well, we are very close now to having no where else to go. The world has shrunk under our prolific desire to breed, travel and conquer.

There are a few places left, where we can, given the opportunity, see nature in its true form and make great effort to leave it as we found it.

One such place is Marsa Abu Dabab, a quiet and sheltered sandy bay that is home to a resident population of Green Turtles and the frequent Dugong, and is one of my favourite dives in the Red Sea. Yet even this perfect little bay is not pristine, for it has endured the ravages of commercial development, herbicidal run-off, and chemical and biological pollution. 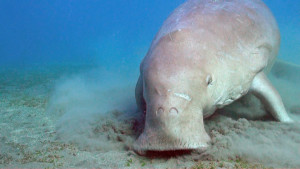 In January 2007, HEPCA (Hurghada Environmental Protection and Conservation Association), together with its partners, the Red Sea Governorate and the National Parks Authority of Egypt, proposed a management strategy to protect the bay and its inhabitants articulated on the following key actions.

Agnese Mancini is a Sea Turtle Biologist with special interest in the bay.

Agnese:  We identified at least 50 different green turtles living in the bay, although they are not there all at the same time. Usually daily sightings go from 15 to 30 individuals. We also found at least 2 hawksbill turtles that are frequently seen feeding or resting on the southern reef.

Jeff: Are they there all year around?

Agnese:  Yes, they use the bay all-year round mostly for feeding.

Jeff:  Do they mate and lay eggs in the bay as well?

Agnese:  We have no evidence that they mate in the bay. As for laying eggs, all the coastline of the Egyptian Red Sea is considered a potential nesting site (especially large sandy beaches), however at present I would say that it is very unlikely for a green turtle to lay eggs in the bay…there is no space left for them to dig nests.

Jeff:  Last time I was there at the end of 2012, I saw quite a bit of holiday resort development. Is this causing a significant problem to the ecology of the bay?

Agnese:  Coastal development is always a problem, especially in small sheltered bays. In Marsa Abu Dabab for example, we do know that the status of the coral reefs both on northern and southern sides of the bay is in bad condition: you can see pieces of broken corals and dead colonies. Also the sea grass meadows are very sensitive to sediments in the water column (usually decreasing the light penetration) and water quality. Sediments tend to increase when you have a lot of people swimming and/or diving too close to the sand and thus moving a lot of sediments that will end up covering sea grass (marine plants that rely on sunlight to survive).

Jeff;  Are the developments regulated at all and is any consideration being given to preserving the area?

Agnese:  There are laws protecting the environment in Egypt and developments are required to provide an impact study before any work can be done, especially in sensitive areas like Marsa Abu Dabab. Unfortunately, most of the time money talks.

Jeff;  How are the Turtles as well as the other species being affected? 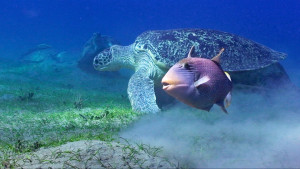 Agnese:  Coastal development can be detrimental for marine species for many reasons: increasing of sediment in the area which bring decreased penetration of light (most marine species, corals for example, need a specific amount of light to survive), changes in the substrate composition, increased disturbance in the water due to the higher number of users, increased noise pollution (again due to boats, zodiacs, people screaming, etc). Coastal developments can also modify the normal patterns of currents and water circulation, although this does not seem the case for Abu Dabab. Another consequence of coastal development is that for example during the rare (but increasing) floods events, all the pesticides and chemicals used in the hotels to appear more “green” are washed away in the bay creating periodical bloom of algae that subsequently kill the sea grass. On a macro-scale, no sea grass means no turtles and no dugongs but on a smaller scale, hundreds of other animals are affected by the absence of sea grass and/or by the higher concentration of chemicals in the water, chemicals that end up accumulating in the sand.

Jeff:  Have you noticed any significant change in turtle numbers over the last few years?

Agnese:  Unfortunately marine turtles and green turtles in particular show naturally very high annual fluctuations in their abundance, so it is very hard with only 2-3 years of data to have an idea of the trend of the population. I personally don’t think that the number of turtles has decreased, but I think the use of the bay is now different: turtles are spending more time in deeper areas that are not used as intensively by snorkelers and divers as the shallow areas.

Jeff:  What is HEPCA doing now to protect the area?

Agnese:  In January 2007, HEPCA, together with its partners, the Red Sea Governorate and the National Parks Authority of Egypt, proposed a management strategy to protect the bay and its inhabitants articulated on the following key actions:

The management plan however has not been respected. We received reports from the local dive centres of safari boats spending the night in the bay especially during summer months and carrying their guests using zodiacs. The enforcement also is not strong enough and being now 100% private, there is no way to limit or control the number of visitors using the bay.

HEPCA is putting more action in place this year to better protect not only Abu Dabab but also other bays with extensive sea grass meadows.

Jeff:  Even before the full scale commercial development started, there were often great numbers of holiday makers snorkelling in the bay and harassing the Turtles in the shallow water. They were doing the same with the Dugongs which of course finally got driven away. Are the Turtles perhaps a little more tolerant than the Dugongs or are they also feeling the pressure?

Agnese:  Turtles are definitely more tolerant to human harassment than the dugong. In Abu Dabab in particular, they got used to the increasing number of people in the water and most of the time, turtle reaction to a wrong behaviour would be to swim further out in deeper area to get rid of the annoying people trying to touch it. This is true for older (and thus bigger) turtles. Younger individuals are much more sensitive to human presence and harassment; if they feel unsafe they will simply move to another bay.

Jeff:  I know there have been a few online petitions created to protest about over-development. Have they had any effect at all? Is it worth divers getting involved on any level to protect the bay?

Agnese:  Of course it is worth divers getting involved to promote protection of the bay! Divers and other users together with NGOs and local authorities are those that can actually push for change to happen and for implementation of new laws.

Jeff: What are the consequences of loosing the bay as it is and loosing all the species that live there?

Jeff:  If the Turtles were to be driven away, where would they go? Where else is left where food is abundant and the pressures of tourism is minimal?

Agnese:  There are other bays with extensive sea grass meadows (for example Marsa Shoni, Marsa Imbarak) but they all have the same problem: a lot of people going there, a lot of boats and zodiacs, no rules. The only pristine areas left are probably in the southern end of the Egyptian Red Sea (wadi Gemal national park and Shalateen area).

You can view Jeff Goodman’s short film on the Turtles at http://www.youtube.com/watch?v=DS0YOnPU1w8&list=UUKfpZWTCn_SdaILHrx5HRvg&index=34

If you would like to know more about the issues in this article or more about HEPCA please go to www.hepca.org or contact Agnese at: agnese@hepca.org

END_OF_DOCUMENT_TOKEN_TO_BE_REPLACED

Another chance to WIN a Sharkskin 90L Performance Bag!!!

For this week’s competition, we’ve teamed up with our good friends at Liquid Sports once again to give away a Sharkskin 90L Performance Bag as…