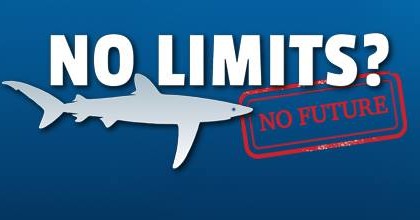 The Shark Trust is launching its No Limits? campaign today in response to the crisis posed by unlimited and escalating shark fishing pressure. With no catch limits set for many shark species, landings have soared over the past decade, placing huge pressure on shark populations. The Trust’s No Limits? campaign highlights the urgent need to introduce science-based catch limits for Blue Sharks, Shortfin Mako, Tope, smoothhounds and catsharks – species accounting for over 97% of reported Atlantic shark landings.

Europe is a significant global shark fishing power with three EU Member States among the world’s top twenty shark fishing nations. The Shark Trust’s No Limits? campaign addresses the alarming impact of these unrestricted landings, which amount to hundreds of thousands of tonnes, representing over 6.5 million sharks from the Atlantic in 2012 alone. No Limits? appeals to the public to support the adoption of science-based catch limits by signing an online campaign petition urging governments to act before it’s too late, and today’s commercial shark species follow other previously abundant Atlantic shark stocks into collapse.

“The EU fleet is responsible for around 40% of reported global shark landings, and 88% of that catch comes from Atlantic waters,” said Ali Hood, Director of Conservation for the Shark Trust. “Reported landings of Blue Shark by the EU fleet have almost tripled since 2003, to approximately 100,000 tonnes in 2012, actual mortality will be far higher. With no catch limits in place, it is imperative that the countries responsible for these landings, and their management, stop uncontrolled shark fishing now.”

Overfishing has so severely reduced Porbeagle, Spiny Dogfish (Spurdog), Angelshark and Common Skate populations that they are now listed by the IUCN as Critically Endangered in the Northeast Atlantic.

“Experts agree that sharks and their relatives face a far higher risk of extinction than most other vertebrates. We now believe that a quarter of all sharks, skates and rays are threatened”, said Sarah Fowler, Shark Trust Trustee. “It’s hard to believe that European fishermen almost everywhere can catch as many of these shark species as they want, irrespective of fish size and age. Limiting shark catches contributes to the sustainable future of coastal communities, as well as sharks.”

The EU has, in recent years, begun to address a legacy of over-exploitation, with the UK strongly championing the Community Plan of Action for Sharks (2009) and the adoption last year of the revised EU Shark Finning Regulation. The Shark Trust now calls on the UK government to take a stand within the EU for the adoption of science-based catch limits for all unmanaged species.

Ali Hood concluded, “No Limits? is a campaign not only for the UK but for all the citizens of Europe; the Shark Trust believes that, when the public realise the sheer scale of shark mortality, they will want to add their voice – No Limits? No Future!”