BSAC divers are being given the chance to take part in a project to study the Crimean warship, SS Faith.

BSAC’s Underwater Heritage Adviser Jane Maddocks is leading the study into one of the earliest examples of naval steam power. 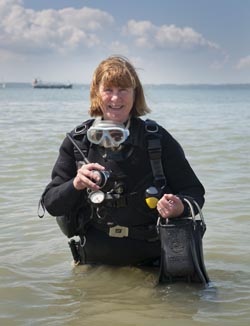 Jane is hoping the project, backed by the BSAC Jubilee Trust, will unravel the secrets of SS Faith, which sunk in heavy seas in the English Channel, 12 miles south of the Isle of Wight, on December 30, 1855.

There are up to 24 places available to BSAC divers who would like to take part in the project.

SS Faith, which was built in a Birkenhead ship yard in 1852, belonged to the Turkish government and was on a delivery voyage to Constantinople when it floundered in stormy seas at the height of the Crimean War almost 160 years ago.

All of the crew were saved apart from one and the wreck now lies at 39 metres.

Jane said the SS Faith is an unusual ship and a very early example of an iron steam powered ship that was also rigged out with full sails.

She said: “It’s a fascinating wreck and I’m really looking forward to the project. She actually belonged to the Turkish government when she floundered in heavy seas and went down.

“Her bell was raised a few years ago and is in the Isle of Wight’s Shipwreck Museum. And although she lies in the English Channel, she is crucially in English waters. She was carrying a pretty ordinary cargo and on her way to Turkey when she sank.

Jane added: “She was built right on the cusp of the time when steam was replacing sail power. But because she had both, and was propeller driven, she had flexibility.

“And although primarily a cargo ship she had been used as a troop ship taking soldiers to the Crimean War which is something we want to further research.”

Jane, who is a member of a number of BSAC clubs including Gosport Sub Aqua Club and Solent Archaeological Divers, said the diving expedition to map the wreck of the SS Faith has been made possible thanks to the £2,000 BSAC Jubilee Trust grant.

She said: “It is an important and rarely visited wreck. I have a core team of around 10 archeologically trained divers but there are up to 24 places available for BSAC divers to join us for two of the dives, on Thursday, July 3rd and Friday, July 4th.

“I really want sport divers to see that they can dive on important wrecks and contribute to archaeological projects without being highly trained or qualified.

“There are so many things we want to do and need good underwater photographers for example as well as engineers who know what they are looking at when it comes to engine parts for instance.”

She added: “The wreck of the SS Faith is pretty spread out and damaged by nature and the fact she has been submerged for almost 160 years.

“BSAC divers wanting to join us and get involved need to be able to dive using nitrox and be qualified to at least Dive Leader or a Sports Diver qualified to Accelerated Decompression Procedure (ADP) level or any diver qualified to use rebreathers.

“What is more important is that we get ordinary divers involved and appreciating important wrecks, such as the SS Faith, and ensuring we learn as much as possible about them.”

Any BSAC divers wanting more information about the SS Faith project can contact Jane Maddocks by e-mail at jmaddocks25@gmail.com.