An interview with Sam Meacham by Jeff Goodman

A few years ago I made a film for the BBC called ‘Secrets of the Maya Underworld’ and was about the Cenotes and forests of the Yucatan Peninsula, Mexico. Previously I had always promised myself not to ever cave dive as I had a fear of being lost or trapped far underground with no escape route. Then a few very good friends told me of the Cenotes and the incredible wildlife that was associated with them. I had to see for myself. 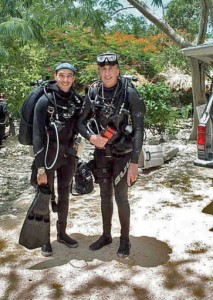 It was then I met Sam Meacham, an American living near Cancun. He had been exploring the caves and passageways of the Yucatan Peninsula for the previous 18 years and now to date has discovered with other divers 252 known caves and cave systems in that region with a total of 1,103.3 km or 685.5 miles of surveyed passageway between them.  Two of the five longest caves on the planet Sistema Sac Actun and Sistema Ox Bel Ha are found close to the town of Tulum.

The Yucatán Peninsula was once a shallow coral reef and now over a few million years has become a porous limestone shelf covered with forest and wildlife. There are no visible rivers; all the fresh water rivers are underground. Being porous, caverns and caves formed where the fresh water collects – hence the Cenotes or water sinkholes.

Recently, the Cenotes have become a great dive destination and the eastern Yucatan coastline an ever developing tourist area for sun worshipers and beach goers. The seemingly uncontrolled developments are taking their toll on this unique ecosystem.

I recently got back in touch with Sam to see if things were improving.

Jeff:  Can you just tell us exactly what the Cenotes are and what is so special about them?

Sam: Cenotes are karst sinkholes that occur in Mexico’s Yucatan Peninsula.  The Cenotes are windows into the freshwater aquifer of the region and the entrances to the very complex flooded solution cave systems along the Caribbean coastline. 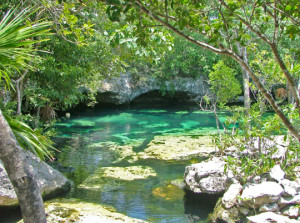 Jeff:  The underground water systems give life to the forests above where wildlife is obvious to find, but is there life in the caves as well?

Sam: Most people think of the cave environment as a very sterile place.  In fact, there are over 40 life forms so far identified that live in the dark recesses of these caves.  The majority are crustaceans and they are all considered extremeophiles because of the conditions they live in.  The Cenotes themselves are also magnets for life; this includes a number of freshwater tropical fish species, crocodiles, turtles in the water and birds and mammals (including jaguars) at the surface.

Jeff: How long has man know about the Cenotes?

Sam: There is growing evidence that the caves and Cenotes were accessed by humans during the last ice age, which was 8000-10000 years ago.

Jeff: Did the Maya have any idea about the complexity of the underground waterways?

Sam:  It is hard to say if the Maya realized that some of the Cenotes were connected by the intricate and complex cave systems. Many of the underground rivers flow out to the sea in very impressive upwellings; perhaps they put two and two together when they observed this.  It was not until the 1980’s that cave divers really began to probe the depths of the Cenotes and really revealed just how complex and extensive they were.

Jeff: Are the Cenotes and reliant ecosystems in any threat now due to the commercial tourist developments? 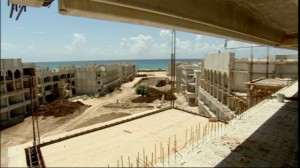 Sam: There is a very real and continuing threat from the development of the tourism industry along the coastline.  Karst landscapes like the Yucatan are very susceptible to contaminants that leach through the porous limestone and into the aquifer.

Jeff:  What are the main issues?

Sam: The main issues we face are contamination from solid waste (garbage) and sewage.  Once contaminants hit the aquifer there is the high potential for them to be transported through cave conduits and out to the Caribbean Sea.  High concentrations of contaminants cause algal blooms that cover the Mesoamerican Reef and kills the corals.  If we lose the reef, we lose the protection to the beaches.  If the beaches erode, where will the tourists go?  Effectively, we risk killing the goose that lays the golden egg.

Jeff:  Is anyone listening to the conservation needs of the area or is commercialism taking its full toll? 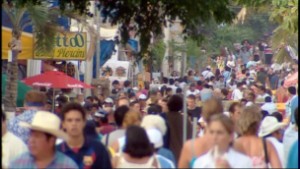 Sam: Well, I think worldwide conservation efforts are always facing an uphill battle and this area is no exception.  But I do think there is a great deal more awareness about the existence and importance of the flooded caves.  My personal belief is that the outreach and education about the caves is the only way we can engage the public and effect change.

Jeff:  As Divers, how can we help preserve this unique ecosystem?

Sam: If you dive in the Cenotes, it is a great opportunity to perfect your skills particularly your buoyancy and trim.  Really, any time you go diving you should be perfecting your skills.  We, as divers, are privileged visitors to the underwater environment and must make every effort to protect it.

Jeff:  If readers want to learn more where can they get further information?

Sam:  Here are a few websites: