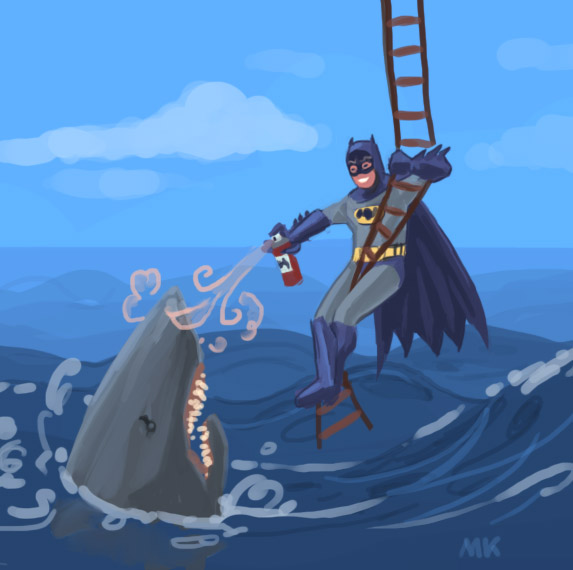 Sales of shark repellent devices are taking off following the unprecedented surge in shark attacks in Hawaii. Some stores have sold out and are waiting for back orders.

At Hana Pa’a Hawaii, customers hoping to buy a locally-created deterrent device are out of luck. The store sold its last Electronic Shark Defense System a couple of months ago.

“Buying it has increased, people coming in to buy it, but the problem is that we don’t stock enough for everybody to buy, so I guess we have to start bringing in more,” said Ryan Houser of Hana Pa’a Hawaii.

The device hit the market at the end of 2011. According to the company, the product sends out a high-voltage electrical signal to repel sharks.

Marathon swimmer Meredith Novack used another product called Shark Shield during her historic journey from Lanai to Maui and back in September.

“It does give me more peace of mind than anything. You don’t know what a shark is going to do. You can’t predict what a wild animal is going to do,” said Novack.

During the nearly 20-mile swim, Novack said her escort team spotted two tiger sharks. She believes the electronic device kept them away.

“One was just after the halfway point and one towards the end. It did come up by the kayak,” Novack said.

Stores are also sold out of the products on Maui, where eight of this year’s thirteen attacks took place.

“So much so we can’t even keep them in stock. The manufacturer can’t make them fast enough,” said Dennis O’Donnell, owner of Hawaiian Island Surf and Sport in Kahului. “Currently, I have at least 15 people on back order.”

But University of Hawaii researchers who are tagging sharks around the Valley Isle are skeptical about whether the technology works.

“In testing various electrical stimuli on sharks in captivity, we haven’t found anything that worked. And in casual testing of some of the commercial products a few years ago, we had sharks that swam through the supposed current field,” said Kim Holland of the Hawaii Institute of Marine Biology.

Holland also questioned the safety of the products.

“Putting a lot of electric current in the water around you can probably be as dangerous to you as to deterring a shark,” he said.

With ocean lovers unwilling to stay out of the water, they’re just trying to find protection from the predators.

“I hope they find a solution to the problem. I know it’s the sharks’ home, but it is a problem if they are going to kill humans,” Novack said.

Floating and gravity based turbines – not piling, says MCS