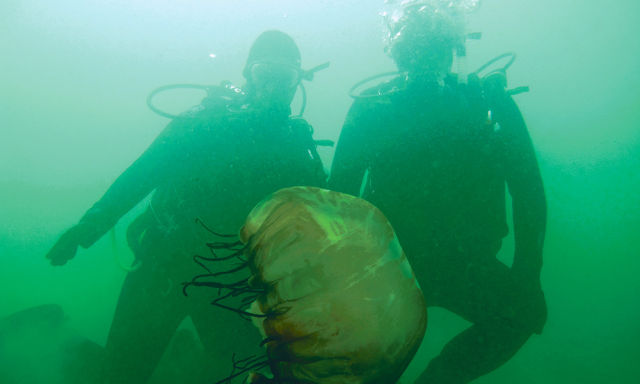 Earlier this month, Kevin and Melissa Barry were diving near the Monterey breakwater when Melissa found a small, velvet-lined box with an elegant latch. Inside was a plastic bag.

“It was a dog’s ashes,” says Kevin, a San Jose-based scuba instructor.

He was surprised to encounter a pet’s remains, but he had come to expect the unexpected during local dives.

“Of all the places I’ve been, I like Monterey the most,” he says. “Every dive, you see something new.”

Gazing at the shimmering blue waters of Monterey Bay, it’s easy to forget what’s hidden here. But those who plunge beneath the ocean surface know that a box of ashes is only one bizarre example of the human footprint on the seafloor.

Barry’s parents co-own the San Jose dive shop Any Water Sports, and they have long been aware of the underwater pollution problem. As early as 1990, they were organizing “garbage dives” and offering prizes to local divers who collected the most (or the most unusual) trash.

Founded in 2011, ‘Dive Against Debris’ is responsible for the removal of over 400,000 pounds of trash from the world’s oceans.

“Trash in our oceans doesn’t do anything good, and none of it belongs there,” says Ania Budziak, Project AWARE’s associate director. “Scuba divers are equipped with some unique skills. They can breathe underwater and are the only people who can really remove trash.”

Barry leads local Dive Against Debris events annually. The dives tend to draw about 20-30 volunteers with one common goal: to gather as much underwater trash as they can. Afterward, they record when and where each piece was recovered. The data is entered into the Dive Against Debris website, where it falls into the hands of Budziak and her colleagues.

“There are cars, there are shopping carts, there are beds,” says Budziak, recalling some notable items. “I don’t think we really lose this stuff. A lot of it must have been dumped.”

Project AWARE has been gathering debris data for years, but until recently, organizers hadn’t found a good way to summarize and share the data with the locals who gather it. “We didn’t have any way of telling the story of trash comprehensively,” Budziak says.

Budziak is optimistic this one-of-a-kind map will help convey where underwater litter is concentrated.

“This is not an effort to scientifically assess how much trash is underwater,” she says. “But it is an attempt to visualize what divers see underwater.”

“The problem of trash in the water depends on the kind of trash,” explains Watanabe, who often leads students in underwater classwork. “Big things with hard surfaces get disguised pretty quickly. Everything here is so prolific in the way it grows. Some pieces of trash become habitats.”

Underwater litter tends to be especially problematic near Monterey Harbor and around Fisherman’s Wharf, he adds. But even there, conditions have been improving.

“It used to be that when we collected octopuses for class, we would dive at the marina and pick up as many beer bottles as we could. Almost every one would have an octopus [inside],” he says. “Now, though, there are fewer bottles.”

Watanabe warns that trash is only a small drop in an ocean of marine conservation issues.

“Trash is the easy stuff, and we need to talk about the hard stuff, the complex stuff,” he says. “But if [picking up trash] changes people’s perspectives on where we are in the biological world, it’s a good thing.”

Changing perspectives is what Dive Against Debris is all about. Budziak says her next step is to survey volunteers to assess whether the project has had any lasting influence on their views or lifestyles.

Barry thinks it probably has.

“It’s kind of a subconscious thing,” he says. “Now, whenever I see a piece of trash, I pick it up.”

Visit www.projectaware.org to join a Dive Against Debris event or check out the new map of underwater trash.

Where are all the big fish?