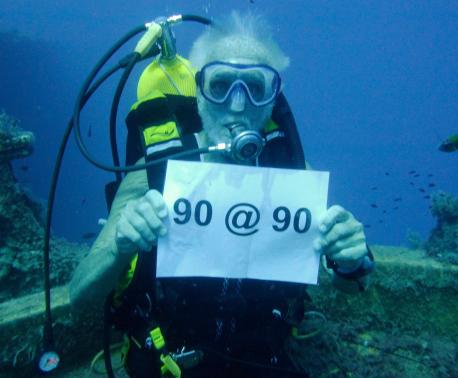 A SCUBA diver from Wirral celebrated his 90th birthday with a 90ft dive off the Cyprus coast.

Ray Woolley, a great-grandfather-of-six, originally from Port Sunlight but now living in Agios Tychonas close to Limassol, used the dive to explore the famous wreck of the Zenobia at the bottom of Larnaca Bay.

The underwater expedition to the site of the Swedish built ferry, which sank on her maiden voyage in 1980 with £200 million of cargo aboard, was arranged by Ray’s regular dive partner Dave Turner, who is a BSAC diving officer.

Ray served with distinction in the Royal Navy during the Second World War, began diving six decades ago around the time when BSAC was formed.

During his career as a radio engineer Ray was posted to Cyprus many times.

It was during one of his spells working on the island that he became an enthusiastic member of BSAC 107S, Western Sovereign Base Areas, at RAF Akrotiri.

Eventually retiring to Cyprus in 1999, he resumed his association with the club.

Recalling his 90@90 dive, Ray said: “After all these years of diving I just thought I’d take the opportunity to do something underwater to celebrate getting to the age of 90.

“Going down to 90 feet was a better option than doing 90 metres which is much deeper.

“It was a great experience but I have to say everyone from the club who with me seemed more excited about it than I was.

“It was a nice thing for the club to arrange for me to do it and I’m very grateful to Dave and everyone else involved.