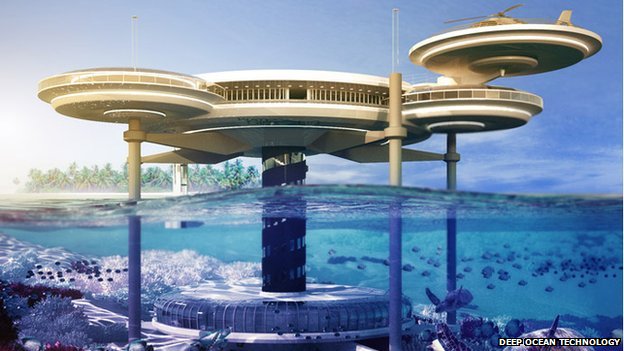 When it comes to luxury hotel rooms, down is becoming the new up.

Instead of penthouse suites, the most exclusive accommodation in the house may soon be at the very bottom, 20ft (6m) or more beneath the surface of the sea.

The idea of sleeping with the fish some distance beneath the waves may sound dangerous but the technology needed to build underwater rooms is well-established and proven.

So says Robert Bursiewicz, a project manager at Deep Ocean Technology, a Polish company that is planning an underwater hotel called Water Discus. It can be towed to a suitable location and placed on supports on the sea bed.

It is made up of an underwater disc containing 22 bedrooms with sea views, connected by lift and stairs to a similar disc above the surface containing other hotel facilities.

“Nowadays it is possible to build submarines which go deeper than 500m (1,640ft) below the sea surface, so building an underwater hotel is not a problem,” Mr Bursiewicz says.

Now that technology is being used in a new way, he says. 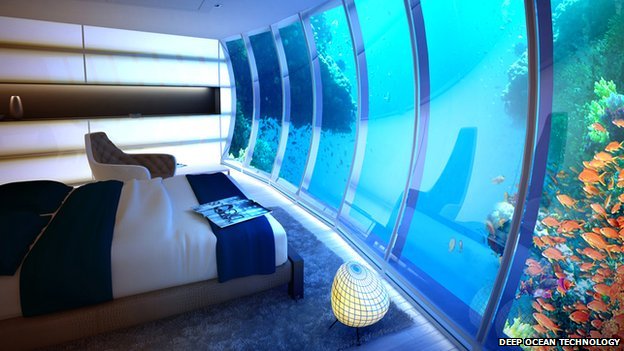 In fact, it should be far less of a technical challenge to build an underwater hotel than a submarine, because hotels are unlikely to be placed more than 15m (50ft) below the surface.

That is because the water acts like a filter for sunlight, and below 15m most colours apart from blue are washed out.

And that means rooms need to be in relatively shallow water for the most spectacular and colourful views of marine life.

“We are aiming to have rooms at a depth of about 10m (33ft), as that provides a good colour environment in sunlight,” Mr Bursiewicz says.