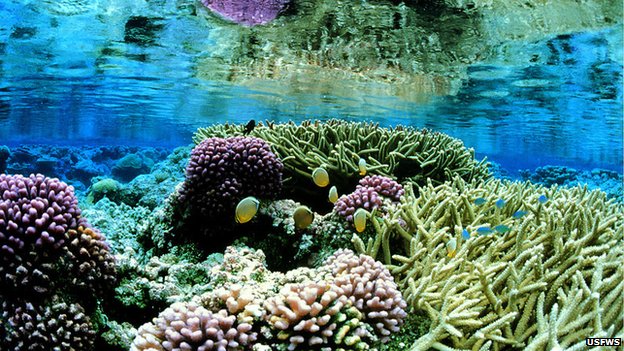 The United States plans to create the world’s biggest marine protected area (MPA) in the middle of the Pacific Ocean.

Fishing and drilling would be banned from an area that could eventually cover two million sq km.

The Pacific Remote Islands Area is controlled by the US and consists of seven scattered islands, atolls and reefs that lie between Hawaii and American Samoa.

Essentially uninhabited, the waters that surround these remote islands are home to a wide range of species including corals, seabirds, sharks and vegetation not found anywhere else in the world.

Now President Obama has signalled that he will extend the area that will be off limits to fishing and mineral exploitation to the limit of US economic control – some 200 nautical miles around the islands.

The White House said the final size of the protected zone would depend on consultations with scientists, fishing and conservation organisations.

The Washington Post reported that this would eventually cover up two million sq km.

“This area contains some of the most pristine tropical marine environment in the world,” said White House senior counsel John Podesta, who made the announcement.

“These tropical coral reefs and associated ecosystems are among the marine environments facing the most serious threat from climate change and ocean acidification.”

Speaking ahead of the announcement, President Obama said that protecting marine areas wasn’t just a good idea for the environment, it made good economic sense as well.

“If we ignore these problems, if we drain our oceans of their resources, we won’t just be squandering one of humanity’s greatest treasures, we will be cutting off one of the worlds major sources of food and economic growth,” he said.

Last year, attempts to create huge marine reserves in Antarctica failed when Russia blocked plans by the US and others for a third time.

Ocean campaigners have welcomed the new US plan as an important step.

“This is incredibly significant and shows global leadership from the US on this issue,” said Karen Sack from the Pew Charitable Trusts.

“There is an amazing array of biodiversity around these islands, there are sea mount systems with a lot of deep sea species, all types of marine mammals.”

Marine Protected Areas currently make up around 2.8% of the world’s oceans – but Karen Sack says the areas that have a full ban on fishing, drilling and other activities are much smaller, which increases the significance of the US move.

“Less than 1% of the global ocean is fully protected,” she said.

“While this area may be far away from anywhere the designation adds to the part of the ocean that is protected in this way which is critical.”

Conserving marine species isn’t just the preserve of large nations like the US.

Recently the tiny Republic of Kiribati announced that the Phoenix Islands Protected Area, will close to all commercial fishing by the end of 2014.

This fishing zone, which is close to the newly extended US MPA, is within a region that is home to the largest remaining stocks of tuna on the planet.