Underwater image makers rely on environmental diversity to push their art to its limits and not just in the underwater environment. With the introduction of the Nikon Z7 and Z6, the full-frame mirrorless camera market has major new competitors to push the segment even further.

The Z7 and Z6, Nikon’s first full-frame mirrorless cameras, offer underwater shooters the same legendary Nikon sensors with the versatility of an electronic viewfinder and the more compact form factor of a mirrorless system. The NA-Z7 supports both the Z6 and Z7 models. 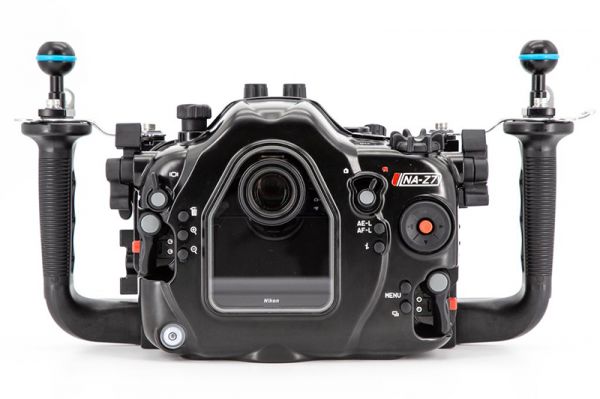 THE NIKON Z6 AND Z7 CAMERAS

For many full-frame Nikon shooters the appeal of a mirrorless camera had been tempered by the thought of having to invest in and master a new system by moving to another ecosystem such as Sony. For those awaiting a mirrorless system that utilized Nikon imaging technology and ergonomics, the wait is over. The Z6 and Z7 cameras feature an identical body, differing only in their feature sets, an ideal feature when it comes to housing the camera for underwater use.

Both camera bodies are built around the new Z-mount.  With an incredibly wide 55mm mount diameter (17% larger than F-mount) and very short flange distance, the Z-mount is able to offer a maximum aperture of F0.95. While the current range of Z-mount lenses is limited, almost the entire line of F-mount lenses is usable with the optional FTZ Adapter. When using the adapter, even non VR lenses benefit from the camera’s in-body stabilization. VR and Z-Mount lenses receive 5-axis stabilization whereas non-VR F-mount lenses have access to 3-axis stabilization.

There is also a dedicated e-VR (electronic VR) that combines optical and electronic stabilization for video shooting. Both the Z6 and Z7 are able to capture internal UHD 4K at 30fps or 1080 HD at up to 120fps at 144 Mbps. Capture uses the full-width of the sensor and both cameras are capable of outputting 10-bit N-log UHD 4K over HDMI that supports start/stop control.

The OLED electronic viewfinder (EVF) of both the Z6 and Z7 gives 100% frame coverage at Quad-VGA (3.69M dot) resolution. When triggering external flashes, both cameras feature a 1/200 X-sync shutter speed. 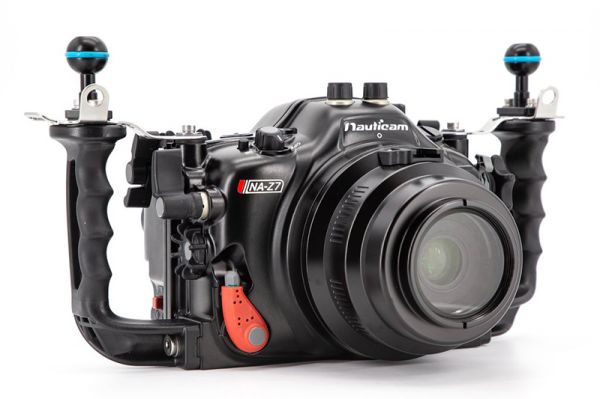 The Z7 features a high resolution 45.7MP FX-format sensor that can shoot at up to 9FPS. The Z7 features a wide ISO range of 64-25,600. Autofocus is acheived with 493 on-sensor AF points that cover 90% of the frame and the camera intelligently switched between contrast-detection and phase-detection points to achieve accurate focus regardless of light conditions.

The Z6 is equipped with a 24.5MP FX-format sensor capable of up to 12FPS continuous shooting with an ISO range of 100-51,200. Video is recorded internally at up to UHD 4K 30p with no field-of-view crop. 273 on-sensor focus points cover 90% of the fame and the Z 6 intelligently switched between contrast-detection and phase-detection points to assure accurate autofocus. 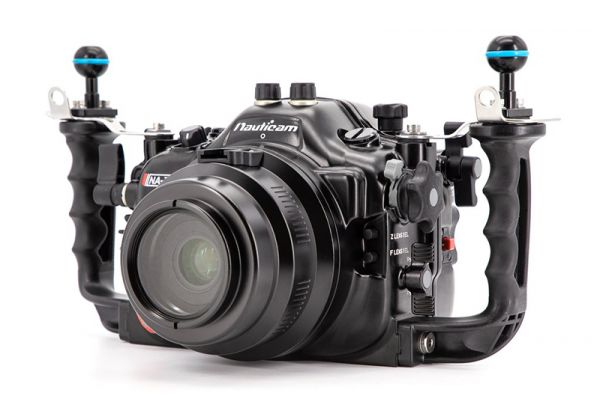 The Nauticam NA-Z7 housing allows not only the use of the new Z mount Nikon glass but also the F mount lenses with the Nikon FTZ Adapter. This is critical as the new Z mount lenses are being phased in over the next few years. The Nauticam NA-Z7 housing features two lens release buttons that correspond to either F or Z mount lenses.  When switching between F and Z mount lenses, the camera must be removed from the housing to remove the adapter.  When working within either the F or Z mount system use the appropriate lens release button to switch lenses without having to remove the camera from the housing. A vacuum system reset switch is located below the tray as well so there is no need to open the rear of the housing during lens or port changes.

The NA-Z7 is part of the N120 port system which allows for full support of Nikon F mount lenses with the same ports needed for their application on Nikon SLR housings. As Z mount lenses become available Nauticam will add supported configurations. 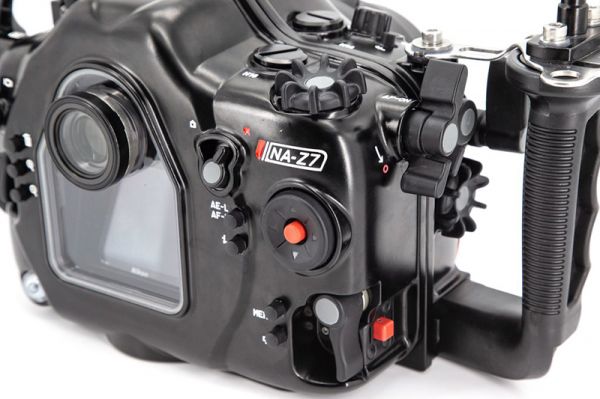 Nauticam engineers are obsessed with functionality and this is evident in the location of essential controls. Regardless of where the control is located on the camera, the Nauticam housing puts them where you need them to be underwater. For those switching between photo and video modes, an easily reachable switch is located on the right rear of the housing. The right side double thumb lever, easily reached from the right handle features access to the AF-on and Record buttons respectively.  Between the double thumb lever and the multi-stage shutter release is an ISO lever allowing quick changes to sensitivity.

The left double thumb lever accesses the DISP and Playback controls. The Zoom In and Zoom Out controls, located on the right rear of the camera body is relocated to the left side of the housing to a location more familiar to Nauticam housing users.

The switch that allows for switching between the LCD display and the EVF, a crucial and much used control with mirrorless systems is located close to the left handle within easy reach.

Front and rear control dials are readily accessible by the familiar large knurled dials at the right handle. The ergonomic housing handles are rubberized and feature stainless steel stiffening brackets to ensure a stable platform when using large strobes or video lights attached to the pre-installed 1″ mounting balls. 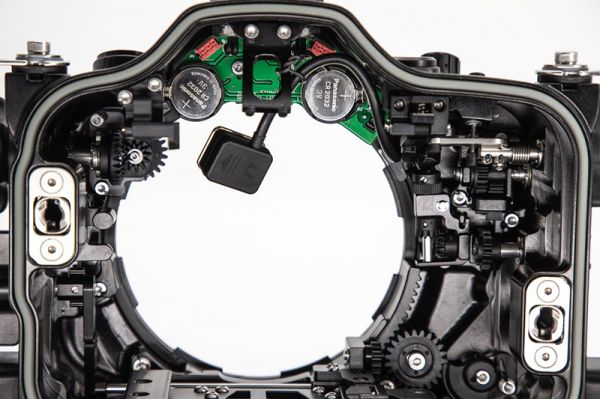 The NA-Z7 comes with Nauticam’s self powered manual flash trigger preinstalled. The flash trigger plugs into the hot-shoe of the camera and uses LED lights recessed into each of the two optical bulkheads to trigger supported underwater flashes when used with the correct fiber optic connection. The flash trigger is powered by coin cell batteries that provide thousands of flashes  per battery. The flash trigger can be upgraded to support TTL triggering (PN 2638 TTL Converter for Nikon). 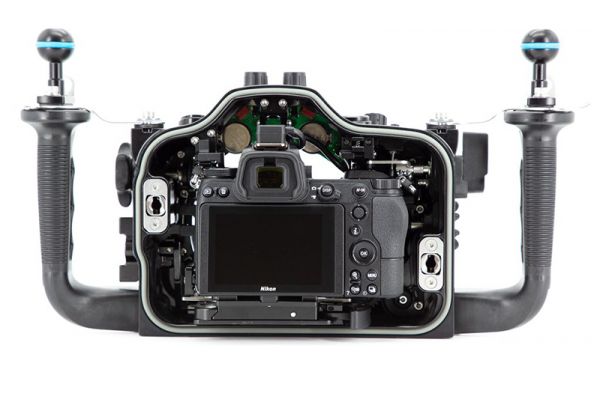 WHAT’S IN THE BOX

More information is available from Nauticam at www.nauticam.com. 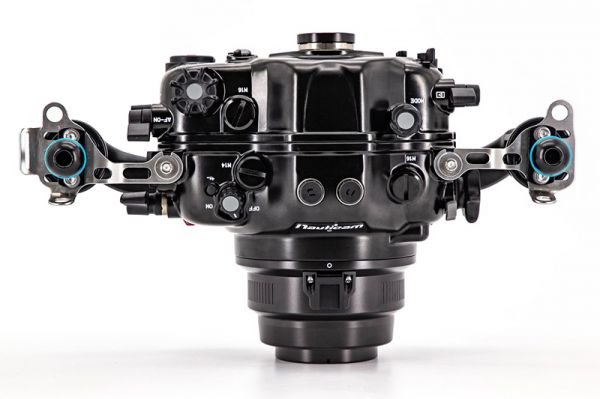