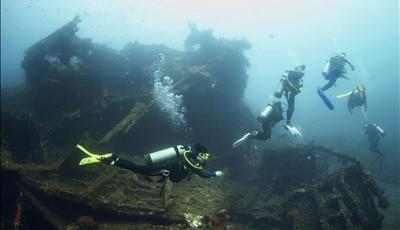 The Indonesian Navy have arrested 10 divers allegedly trying to steal from shipwrecks recently.

Five of the divers were Vietnamese nationals, while five others were Indonesian.

They allegedly used a motor boat to transport the precious items. Harjo said three of the Vietnamese divers were suffering from decompression sickness when they were intercepted by naval officers. They were later rushed to Tanjung Pinang Naval Hospital.

In the past year, Harjo said, the Navy had captured three gangs who were trying to steal sunken objects in the area.

“Most of them pretended to be fishermen and most were Vietnamese nationals who worked hand-in-hand with Indonesians. The Vietnamese usually dive underwater to check the location of the shipwreck,” Harjo added.

Indonesia is home to 463 sunken vessels, eight of which are around the Riau Islands.

In March, as many as 3,680 pieces of earthenware were found when the Special Police for the Management of Coastal Areas and Small Islands confiscated them from a group of divers off Numbing Island (also in the Riau Islands).

Thousands of valuable items that have been looted from shipwrecks sit idly in government warehouses. Maritime and Fisheries Resources Monitoring Task Force director general Syahrin Abdurrahman called on the government to immediately auction off the valuable items so the proceeds could go to state coffers.

“Such theft is rampant in the Riau Islands waters because the sunken objects have both high economic and cultural value,” Abdurrahman said.

“There are millions of salvaged items stored in three Maritime Affairs and Fisheries Ministry’s warehouses. We have asked the government to auction off the items and for the proceeds to be added to state coffers, which can then be used in the interests of the nation and state,” said Syahrin.

He said his agency was facing difficulties in paying maintenance costs, adding that it would be appropriate to keep some of the items as samples, such as for research or as museum exhibits.

Diver dies after being found at Dutch Springs, Pennsylvania