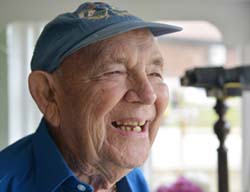 One of Hull’s original ‘frogmen’ – now aged 90 – has launched a search for fellow scuba divers to help celebrate a historic landmark.

Great grandfather Reg Thompson is appealing for past members of British Sub Aqua Hull, the club he helped found in 1954 to join in its Diamond  Anniversary festivities.

Amazingly, Reg only hung up his fins three years ago at the age of 87.

“It broke my heart when I had to stop, but my legs are not up to it anymore,” said Reg, now an honorary life member of the British Sub Aqua Hull branch.

“It means I get in for free!” he laughed. “When we first started out it was sixpence a week to join, which was a lot of money in those days.We went by the name of Hull Frogmen – myself and five diving obsessed friends.”

Reg has a treasured collection of photographs from his diving days but would love to see any other club photos or souvenirs from former members.

Hull’s Diving Officer, Trevor Jones, of Beverley, was inspired by Reg to take up diving. He said: “Reg knows just about all there is to know about scuba diving and has helped bring along so many of our youngsters over the years. He is a great character.”

Reg, whose home in Flamborough overlooks the North Sea, recalls how he and the other club founders started out by making their own diving suits.

He said: “One of them lads, Bob King, would come over to our house for tea nearly every night and we would obsess about diving, experimenting with homemade gadgetry. We operated on a shoestring, with hardly any funds. We made our own suits out of rubber sheets which were used at the time to line babies’ cots. We would stick them together with glue.

“Eventually neoprene came along which was a lot better. I remember making masks too, using rubber tubing and calor gas valves converted with an elastic band.”Our methods were very unorthodox in the early days.”

British Sub Aqua Hull, which currently has about 38 members, is keen for as many past and present members as possible to attend a 60th birthday barbecue at the aptly named Ship Inn in Dunswell on June 28.

“We’d love to hear from former Hull divers and to see any old photos or divingmemorabilia they can bring along to share with us. As a club we must have had more than 1,000 members pass through our doors over the last six decades so hopefully some of them are still in the area and able to attend,” said Trevor.