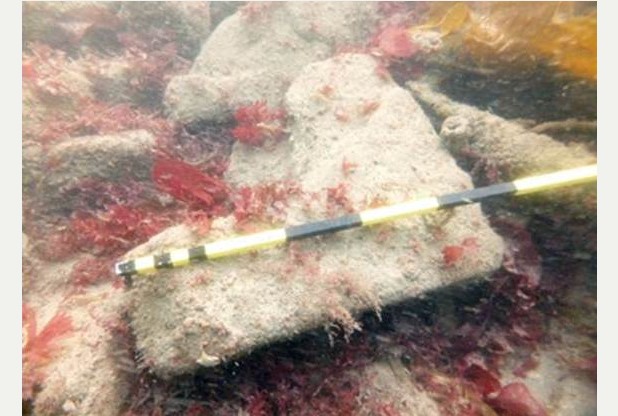 Divers are getting ready to excavate a wall on the seabed off the Plymouth coast in Devon in the UK which is thought to have been buried for thousands of years.

The 570m-long bolder wall is thought to have originally been put in place to protect the southern end of Jennycliff Bay from rising sea levels.

The origins of the wall are unknown, but initial investigations show it has a structure similar to that of a dry stone wall, suggesting it wall may have been man-made.

Peter Holt, project manager for the SHIPS (Shipwrecks and History In Plymouth Sound) group, said: “Thousands of years ago the sea level in the English Channel was much lower than it is today. Plymouth Sound would have been dry land and the river Tamar would cut across the valley and out to sea. When sea levels rose the Sound would have been slowly flooded, so the wall may have been built to protect what was dry land in Jennycliff Bay.”

The wall, which is 1.5 metres tall, runs north to south across the bay, and divers are preparing to dig trenches in the seabed to get more detailed information.

They will be working from the local dive boat Maid Maggie, which will be anchored over the site.

Mr Holt said: “The wall is partly buried on the deeper side because the Sound has partly silted up since the wall was been built, so the divers will excavate down this side of the wall to confirm that it does continue under the sand.

“On the shallow side the seabed has filled in up to the top of the wall, so trenches will be dug to find out the wall’s shape on this side.

“Samples of the sediment from the trenches will be taken at different depths and will be taken back to Plymouth University for analysis that may provide a date when the structure was built.”

The SHIPS project started in 2009 to investigate the maritime history of Plymouth and its estuaries. For more information about SHIPS, click here.