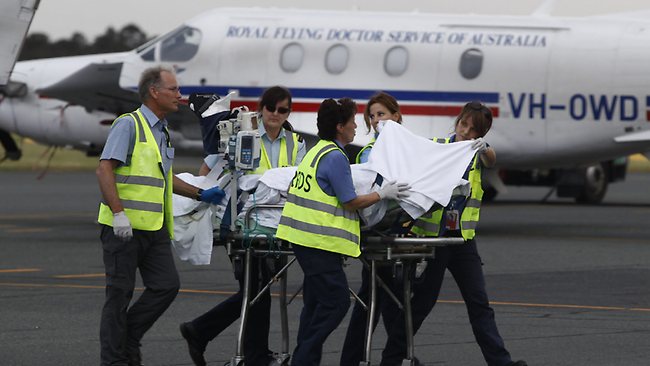 Shark attack victim Greg Pickering has undergone 10 hours of surgery and is in a stable condition after a horrifying attack yesterday.

Mr Pickering – who survived an attack by a 1.5m bronze whaler in March 2004, while spearfishing with a friend about 9km off Cervantes – was working about 180km east of Esperance in Western Australia yesterday when he was attacked again, by what’s believed to be a great white shark.

Just before 9am this morning a Royal Perth Hospital spokeswoman said Mr Pickering was out of surgery and in a stable condition. He is expected to speak to the media about his ordeal in the next few days.

Tonight, Nine News reports that Mr Pickering was bitten on the head and chest, and that he has lost an eye in the attack.

Nine News also reports that Mr Pickering endured hours of travelling by boat and car before he could receive medical treatment.

His quick-think diving colleagues applied pressure on his wounds with anything they could find as he endured a 40km boat tow back to shore.

At the same time, a crew on a nearby boat lent assistance and used a satellite phone to arrange a rendezvous point with paramedics.

Early this afternoon, the WA fisheries department cancelled a “catch and kill” order for the shark.

Director General Stuart Smith issued a statement saying the order had been cancelled because there was no longer an imminent risk of another attack.

“There have been no further sightings of a white shark in the area and it is likely that the shark responsible for the attack is no longer in this general locality,” Mr Smith said.

“Efforts have also been made to advise people camping around Cape Arid about the incident which has reduced the likelihood of them entering the water.”

Capture gear was deployed at the site of the attack yesterday and re-set at 5am this morning.

Earlier today, the department said the shark posed an imminent threat to campers to the area during school holidays.

But Mr Smith conceded this morning it was possible the wrong shark could be caught.

“We probably won’t know for sure unless there’s evidence of DNA that we will be able to test,” he told reporters this morning.

Mr Smith admitted the DNA results would not come back until after the animal was killed.

But he added that the size of the animal would also help to determine if it was likely to be the shark that attacked Mr Pickering.

Mr Smith said the department’s shark experts had informed him that the shark could have swum away from the area or it could remain lurking in the waters for some time.

It is the second time a kill order has been issued in WA.

On the previous occasion, two tiger sharks were caught and released after they were tagged, but the great white shark the department was looking for was not found, Mr Smith said.

A department spokeswoman said a decision on whether to continue with the kill action would be made this afternoon.

Australian Underwater Federation WA spearfishing representative Graham Carlisle told reporters that Mr Pickering was an active and respected member of WA’s diving community and had held the position as records officer with the federation for many years.

“Greg has always been involved in the ocean life; he’s spent a lot of his time in the water both for pleasure and for work,” he said.

“He would have had a number of close calls, as would any spearfisherman.

“The more time in the water, the higher probability something will happen. That’s just an accepted reality of the work.

“The guys are very cautious, they’re very careful in general.”

Mr Carlisle said the diving and spearfishing community was very close-knit in WA.

“All the abalone divers know each other and the spearfishermen are just as tight,” he said.

He was taken to shore by divers on a nearby boat and transferred to Esperance Hospital by St John Ambulance just before 2pm.