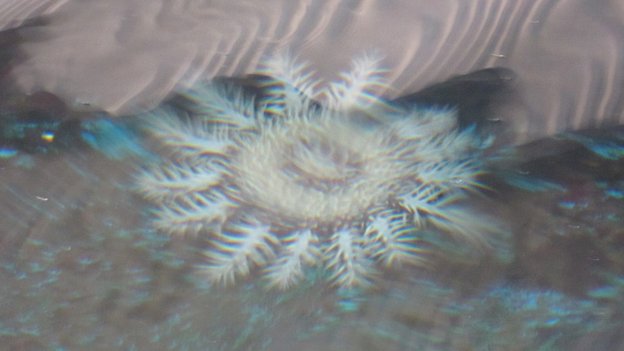 Waves of carnivorous starfish are eating their way through Australia’s Great Barrier Reef – and sugar cane farming is being blamed.

Researchers at Australia’s Institute of Marine Science (AIMS), just outside Townsville, Queensland, in north-east Australia, have mapped the pattern of destruction.

Dr Katharina Fabricius, coral reef ecologist and AIMS principal research scientist, said “Coral cover is half of what it was 27 years ago, coral cover is going down at an alarming rate.”

She said the biggest culprit was the Crown of Thorns Starfish (COTs).

“There are three main sources for the coral decline, one is storms, however 42% is attributed to Crown of Thorns Starfish – and just 10% due to bleaching. This compares with 70% due to bleaching for reefs elsewhere in the world , such as in the Caribbean.”

Bleaching occurs when corals are stressed by changes in conditions such as temperature, light, or nutrients. They expel the symbiotic algae living in their tissues, causing them to turn completely white.

Australian scientists are now looking at ways to reduce the destruction wreaked by starfish, which have the ability to smother coral and digest the fleshy parts.

“Crown of thorns are amazing creatures, they can grow to larger than a dinner plate, they have multiple arms and they’re covered in spines,” said Craig Humphrey, manager of the AIMS SEASIM project, the world’s largest marine environment simulator.

“They go onto a coral, invert their stomach and dissolve and digest the coral tissue.”

The SEASIM team is running a series of experiments on COTs to look at ways of lessening their impact on coral.

You can read more of this story here.

In Florida? Join The Experts: Experience The Underwater Wonders Of Palm Beach County