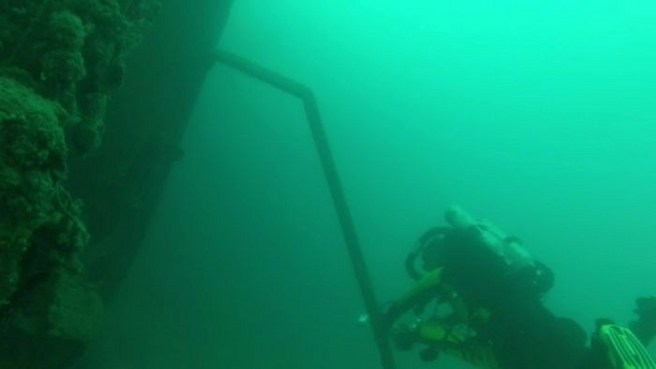 Survivors, historians and Defence personnel have been horrified to discover that the wreck of HMAS Perth, which was sunk by the Japanese in 1942, is being destroyed by commercial salvagers in Indonesian waters.

Australian authorities have tried to keep the scandal a secret, fearing the issue might add fuel to the ongoing diplomatic tensions between Australia and Indonesia.

The warship, which sank in the Sunda Strait between Sumatra and Java, is the last resting place of as many as 355 Australian sailors who went down with the vessel after it was struck by multiple torpedoes.

But it has never been protected as an official war grave.

Australia and Indonesia are yet to ratify the UNESCO Convention on Underwater Cultural Heritage, a binding national treaty which would oblige both countries to protect such sites.

Since at least September, scuba divers have made official reports of large-scale damage to the wreck from a massive floating crane equipped with a salvage claw.

Several salvage barges have been spotted in the area, and one was photographed in October dredging up the carcass of a Dutch submarine – the O-16 – which sank off the coast of Malaysia.

Sam Collett, a professional diver based in the Philippines, told reporters he last visited the wreck in September.

“Compared to previous trips I had made, the extent of commercial-scale salvaging was immediately obvious,” he said.

“On the boat trip back to the marina in Anyer we passed a salvage barge with a crane and claw and a large pile of what appeared to be wreckage on the deck.”

Andrew Fock, an expedition diver with a keen interest in HMAS Perth, said there was “extensive damage”.

“As best we can tell from the video footage supplied, most of the superstructure – if not all of it – is gone, the guns from the forward turret, the A-turret are missing.

“The gun houses for the two front turrets are missing, and most of the upper deck… is missing.

An official report was lodged with the Department of Defence in October detailing the damage. The report said there was a strong possibility that human remains still exist within sections of the ship and that they risk being disturbed.

It warned action must be urgently taken to prevent further mass salvaging.

“It is probable that unless action is taken the salvers will return and continue to pull apart the wreck, especially if their previous efforts have been remunerative,” the document said.

“It should be noted that any attempt to remove the exposed starboard armour belt would likely involve its supporting structure and prove catastrophic to the integrity of the remaining hull structure.”

There have been other reports of the use of explosives by salvagers to break up the ship and make it easier to dredge.

In September, an Indonesian-based diver wrote: “The mid section above deck, where the bridge was, has been completely removed, the bow guns have been damaged by what appears to be explosives with the barrels missing and the tops peeled of [sic], the bow has collapsed completely.”

“Although it is hard to be certain, but as the metal that was the superstructure is all missing and is not lying around as debris it looks although we could be wrong like purposeful attempt to salvage the steel.”

The Defence report also made specific mention of risks posed by the fuel oil and ordnance on board the Perth.

The Indonesian-based diver did a second dive in September to confirm his findings. In an email, he reported that the vessel is now too “unstable” to allow divers to penetrate the interior of the ship.

“She has been hammered and the once impressive six inch A1 and A2 turrets are gone, the bow is flat and… the wreck is more hazardous than before – even for general swimming around, with lots of live ordinance, wire and overhanging metal.”

“The explosions have unearthed a fair amount of WW2 live rounds and what look like modern explosives (plastic flare shaped things) I assume from the salvage also appear to be lying about, be very careful what you poke in the sand/silt.”