Reefs around the world have taken a terrible toll from all our marine exploits. Over fishing, pollution, coastal development, diver damage, ships’ anchors….. the list goes on. And now on top of all this, the reefs are further dying through climate change and acidification. Warm water coral reefs are the most affected but many of the same pressures are felt on temperate reefs too.

World wide, coral reefs are home to approximately 25 percent of the animals and plants that live in the ocean. They protect vulnerable coastlines from raging seas; they are nursery grounds for many species as well as permanent homes for countless fish and invertebrates. More than 500 million people depend on reefs for their primary source of protein. They provide us divers with magnificent backdrops to our underwater adventures. The tourist trade over many parts of the world depend heavily on healthy and vibrant coral reefs for their visitors to enjoy. And yet we systematically crush them back to white lifeless limestone.

As the oceans’ ecosystems fall into serious decline, so we look at ways of addressing the balance. Artificial reefs are not new. Countries around the world have been making them in one form or another for generations. But here in the UK, as is too often the case, we are sadly lagging behind in our efforts to make these new potential reefs work – not only for us, but for the marine environment in general.

There is a group people trying to make some changes, and this is their story so far. 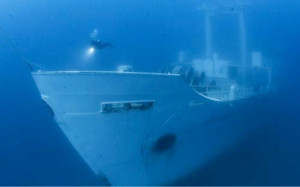 Because of the difficulty in obtaining those permissions it soon became apparent that the way forward was to obtain permissions for a square kilometre of sea bed where we could sink not just one, but two ex-naval warships.  Along with other inert reef material creating a reef sanctuary that it is hoped would be the first of many in the UK.

As of today hundreds of artificial reefs have been created throughout the world, ranging from small concrete structures in Kerala India http://www.indiaenvironmentportal.org.in/node/10479  to huge aircraft carriers  http://artificial-reefs.blogspot.com/2006/05/navy-ex-aircraft-carrier-uss-oriskany.htm   all without exception having a positive effect on the marine environment and local business in general, both short and long term.

In 1997 it was Tina Thomas of Portland Oceaneering that first started to put any real effort into the possibilities of the Weymouth and Portland area having its very own Wreck to Reef. It has to be said, it was very much a one woman crusade for several years. After repeatedly hitting a brick wall, Tina had to make the choice between her own business and the reef project.

In more recent years, Lisa Wallace of Silent Planet continued to drive the idea forward, and spent a couple of years and a lot of her resources on producing evidence that actually showed for the first time just how important the diving industry as a whole was to the Weymouth and Portland area. Unfortunately, but not surprisingly, Lisa was faced with the same dilemma Tina had faced years before. 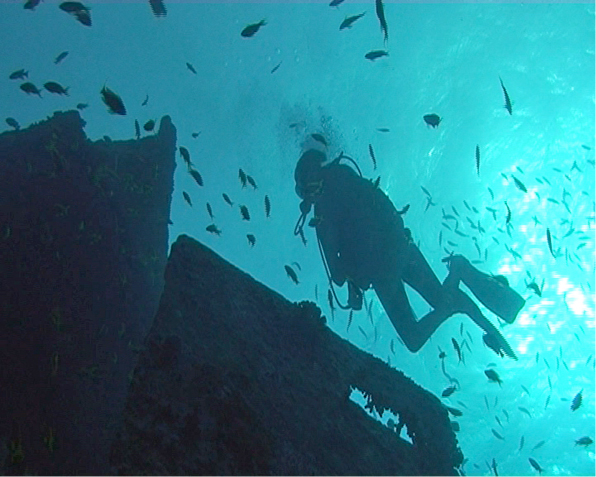 As with most of us reading this, life is busy and with those of us with businesses, we all know just how precious and valuable free time is. Although, at the time we all wished Tina and Lisa well, they were very much left to get on with it.

It must be acknowledged that without Tina Thomas and Lisa Wallace , we would still be tying up our running shoes, but instead we, our industry and our community has the baton firmly in our grip and can move forward with this awesome project.

Sean Webb and Marcus Darler of O’Three Ltd, and Dale and Ron Spree of Fathom and Blues are two of those companies that gave lots of verbal support to Weymouth and Portland’s very own artificial reef concept, but were both busy in keeping their own businesses on track. Although Fathom and Blues and O’Three continue to do well, it was plain to see just how diving in general was on the decline in our area.

Learning from the past (and that is not a criticism) O’Three and Fathom and Blues both realised early on that things would soon fall flat if firstly, they didn’t get somebody independent to put some consistent time into it (and be prepared to pay for that time), and secondly, to get as much support as they could not just within our industry, but further afield.

It was at this stage Neville Copperthwaite’s name was put forward as a possible project co-ordinator. There are people who talk and people who do, and Neville is well and truly one of the latter. If anyone can get this project further along, then it’s Neville Copperthwaite. In gathering all of the existing data and the new information he has collected and his ability to find the right doors to knock on and then open, at such an early stage in his involvement, is amazing.

The general national decline within the diving industry has been exacerbated in Weymouth and Portland by three things: the sinking of HMS Scylla in Plymouth; the building of an accessible launching facility in West-Bay at Bridport; and a ban on diving the HMS Hood in Portland Harbour (for safety reasons).

Drawing on the experiences and the resulting benefits of previous man-made artificial reefs, notably in Plymouth but also around the world, it is believed that this project will help redress the economic down-turn within our diving industry.

Man-made artificial reefs are not a new thing by any means. The Japanese have been building them for over four hundred years to improve their fish stocks (they’re determined they won’t run out of sushi). Canada, America and Australia have been sinking ships as diver and angling attractions for up to thirty years or more. Brazil is currently manufacturing concrete reef balls which have pioneered reef restoration throughout the world. In India, villagers make triangular concrete structures utilising the very sand from their beaches, then they sink them to redress the damage done by commercial trawling.

In fact, only a few miles from where we are today, a reef is being constructed by a New Zealand company to facilitate wave formation for surfers. This is happening now, off Bournemouth beach in Dorset, UK.

Even closer to us in Poole Bay, Dr Ken Collins of Southampton University has been monitoring an artificial reef that he had constructed back in the eighties, and if any of you had been to one of his fascinating lectures on this subject, you would have seen the resounding success of the increase in marine life in what was previously a relatively barren area. The upshot is that artificial reefs work for whatever is asked of them.

There has been much academic research done on this subject worldwide, including Southampton University and all this is well documented. By and large, this research shows that provided the obstacles used for artificial reefs are environmentally clean, and are heavy enough not to migrate from where they are placed, then the biodiversity of that area will increase dramatically.

But we don’t want to profess to you that we are doing this solely for the environment. That would be wrong, and we are not. Economics is the driving force behind this. The diving industry in Weymouth and Portland is a shadow of its former self. For instance, in 2003 there were twenty four dive charter boats operating out of the area… and now there are less than half that number.

However, having said that, marine life will still flourish on an artificial reef, no matter what the politics.

And talking of politics, we are under no elusions as to how difficult it will be to secure all the necessary permissions. There will be the Crown Estates to deal with, the MCA, Southern Sea Fisheries, English Nature and a host of other organisations. This fragmentation tempts us to suggest on a broader note that artificial reefs could be used as an integrated management tool within the European Coastal Zone or at least within the C-scope project. This would have the effect of streamlining and encouraging the whole business – and all this before persuading the MOD to part with a ship, let alone finding funding for the project – but it’s been done before, and it can be done again.

We have already received practical support and enthusiasm from Weymouth and Portland Borough Council.

Gary Fooks, the 2012 Olympic Legacy Director, is including the project as part of his plans so that a world class dive venue can run alongside a world class sailing venue. The Portland Partnership and Portland Gas Ltd are working with us and will allow us to install a viewing system between the proposed reef and an interpretation centre on Portland and elsewhere. Southampton University, a world leader in artificial reef research, will become involved in our environmental impact studies.

Just a thought to leave you with – Japan has artificial reefs covering some twelve percent of its coast. It sees its artificial reef program so economically important that its annual reef budget is equal to our annual military budget.

Through the three year process of obtaining permissions to sink two destroyers and create artificial reefs, Weymouth and Portland Wreck to Reef have by coincidence created a new way to manage an area of sea-bed by the people for the people.

It has been suggested that Weymouth and Portland Wreck to Reef now has a blueprint that should be adopted across the whole of the United Kingdom.

The jewel in the crown of these reef sanctuaries is of course the once jewels of our naval history, our warships.

Our ex-naval ships could be cleaned and made ready responsibly here in the UK and would help create much needed habitats for our ailing marine environments and bring decades of revenue to our coastal communities.

The UK is sadly out of step with the rest of the world with regards to giving ships as ‘deeds of gifts’ to any organisation.  Portugal and Thailand sunk four ships in 2012, with Portugal planning to sink another two warships this year.

It is hoped by signing this petition you will help Wreck to Reef change the British Governments view and, by deed of gift, give us at least one vessel.

END_OF_DOCUMENT_TOKEN_TO_BE_REPLACED

One Reply to “ARTIFICIAL REEFS – Do we need them?”