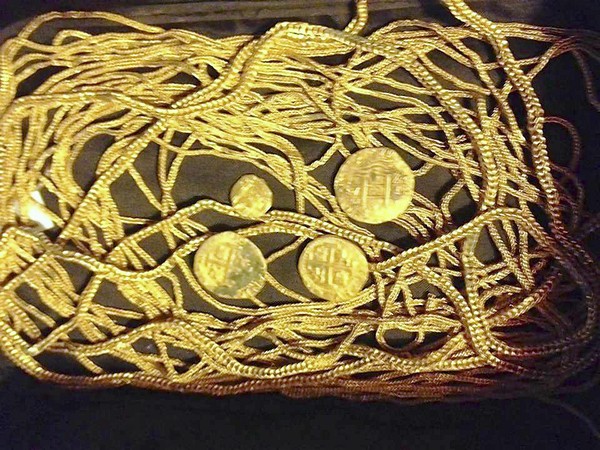 Most treasure hunters go a lifetime and never take home a single piece of silver. But one Sanford family is now among the divers who struck gold — and a lot of it.

The treasure-hunting Schmitt family uncovered this weekend what could be $300,000 worth of gold chains and coins off the coast of Fort Pierce.

“This is like the end of a dream,” said Rick Schmitt, who owns Booty Salvage.

The discovery came about 150 yards offshore and only 15 feet down. Schmitt’s family — along with diver and friend, Dale Zeak — said they found 64 feet of thin gold chain that weighed in at more than three pounds, five gold coins and a gold ring.

Brent Brisben, co-founder of 1715 Fleet – Queens Jewels LLC, the company that owns the rights to dive on the wreckage site, came up with what he called a conservative estimated value of the haul.

“To be the first person to touch an artifact in 300 years, is indescribable,” Brisben said Monday. “They were there 150 years before the Civil War. It’s truly remarkable to be able to bring that back.”

Schmitt’s company is a subcontractor of Brisben’s company.

Like most hunters, she was used to dredging up old beer cans and broken fishing equipment on her summer excursions aboard her family’s vessel, the AARRR Booty. She has been diving with her family since she was 6.

The centuries-old loot came from a fleet of Spanish ships struck by a strong hurricane off Florida’s coast on July 30, 1715. More than 1,000 people were killed in the storm that claimed 11 of the dozen ships.

Mounds of gold, silver and other artifacts were spilled across the ocean floor. Some was recovered in the years after the storm, but many treasure hunters and historians believe that millions of dollars in silver and gold still remain, according to the Queens Jewels website.

Florida’s Treasure Coast was named after the disaster.

Brisben also struck gold this summer. One of his ships raked in 51 gold coins worth about $250,000.

The state gets the first pick of the treasure. Up to 20 percent of the rarest finds will be displayed in museums. The rest will be split equally between Brisben’s company and the Schmitts.

Even so, for the Schmitt family, the hunt is about more than just the money.

Her husband went on his first treasure dive near the Sebastian Inlet when he was a teenager in 1964.

Over the decades, 65-year-old Rick Schmitt has been on hundreds of excursions between Fort Pierce and the Sebastian Inlet. Although he and his crew have found coins and other artifacts in the past, he said this is the largest find he has ever come across.

But it wasn’t until Schmitt sold his Sanford-based pest control business in 1999 and retired, that he started his family’s diving salvage business.

In 2002, his son, Eric Schmitt, then a Lake Mary High School sophomore, had his first big find near Sebastian. He uncovered a silver platter minted in Mexico nearly 300 years ago. The platter was worth about $25,000, Brisben said.

The Schmitts used their first ship, Booty Quest, until it was nearly destroyed by Hurricane Frances in 2004. Last season, which generally lasts from Memorial Day to Labor Day, was their first time diving on their own vessel since then.

Last year, they found only a single gold coin on Labor Day.

But as Lisa Schmitt said, that is the life of a treasure hunter.