Conservation International (CI)’s Mark Erdmann previously blogged about the Bird’s Head Seascape surpassing the milestone of 1750 reef fish species recorded, leaving no doubt as to where the global heart of marine biodiversity lies. The remote tropical islands of Raja Ampat, West Papua, are the epicenter of this marine richness, and may be a haven for shark diversity in particular – That’s what we’re in the process of finding out with Conservation International’s science and monitoring team, through an innovative shark research program.

Sharks are ancient animals and are important for healthy oceans, yet they are threatened with extinction. The people of Raja Ampat traditionally live harmoniously with nature, but outside threats are encroaching. Guardians of their natural heritage, local people, supported by international partner organizations CI and TNC, set up Marine Protected Areas (MPAs) for conservation (Watch a tribute to the “Guardians of Raja Ampat”). Additionally, in 2012 the local government declared the entire region an official “Shark Sanctuary” through a law that protects all sharks and rays, as well as other charismatic key species, such as dugong, sea turtles and endemic species. This was a positive step in recognizing the benefits of healthy elasmobranch (cartilaginous fish, such as sharks and rays) populations for local communities, both economically and ecologically.

These management initiatives, combined with effective patrol & enforcement, and understanding shark populations, should help locals manage MPAs to protect these charismatic species, thus helping improve food security and alternative livelihoods through tourism. The mantanomics are sound, and the revenue that could be brought in by shark tourism is probably comparable. 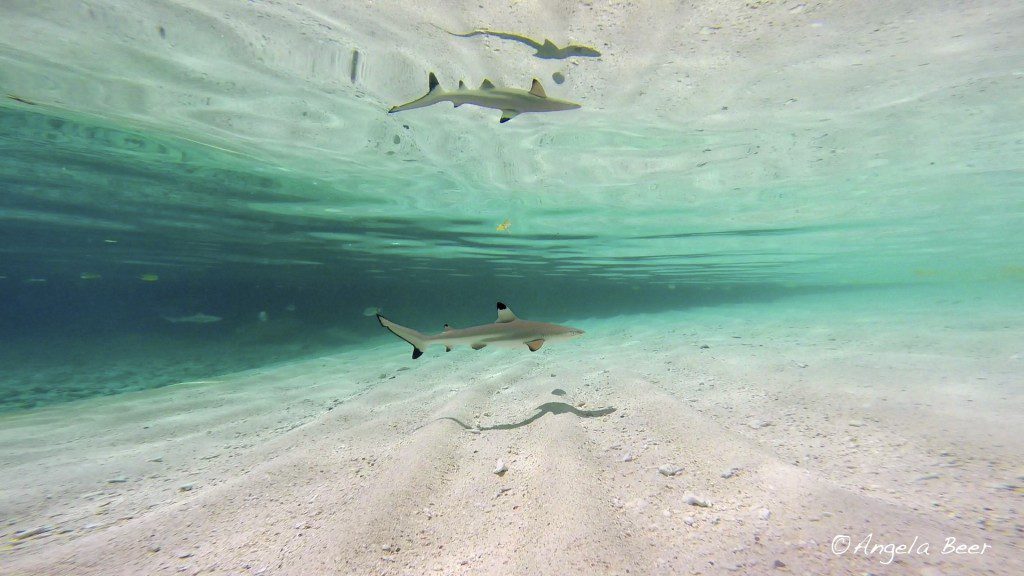 We are working to complete the final stage of a study to assess the current status of shark populations in the Raja Ampat archipelago – and will be making a second bid on collecting the data for the final piece of the puzzle, working together with Misool Eco Resort in the spring!

Research uses BRUVs (Baited Remote Underwater Video) to analyze shark diversity and relative abundance between no-take and fished sites over depth gradients. This study provides baseline data to enable assessment of the impact of management efforts related to Patrol & Enforcement, and Outreach & Education, of both the Marine Protected Areas (MPAs) and the Shark Sanctuary as a whole throughout Raja Ampat. 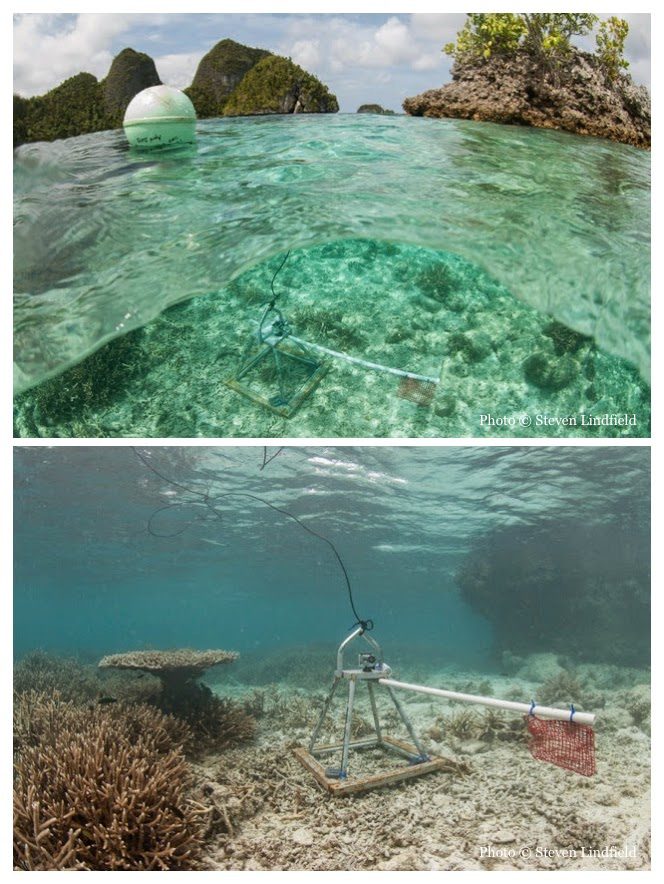 The first field data collection trip was a great collaboration where we learned a lot and ultimately went exceedingly well. Despite many challenges, including rough weather and wild sea conditions, the disciplined, hard-working team completed monitoring at Wayag MPA, Dampier MPA and the Fam Islands. GoPro cameras were submerged in shallow, medium and deep waters at a minimum distance of 500m from one another, and left to record for one hour. In 15 days of surveying we successfully completed 470 camera drops – two more trips got the tally up to almost 1000, now including Ayau, Kofiau and Mayalibit Bay MPAs as well! 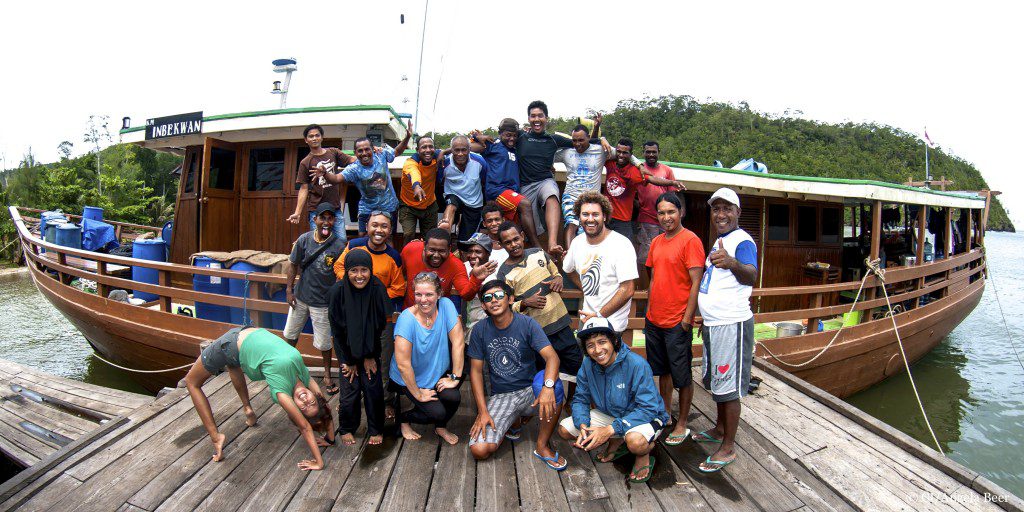 Although completing data analysis is taking longer than anticipated, preliminary reviews suggest that approximately 50% of the videos captured contain images of sharks. At least nine different species of shark were recorded, including the common black- and white-tip and grey reef sharks, tawny nurse shark, banded bamboo shark, and an exciting first for Raja Ampat (and thus a +1 for the Raja Ampat species count), Hemipristis elongata, more commonly known as the “Snaggle-toothed shark”. 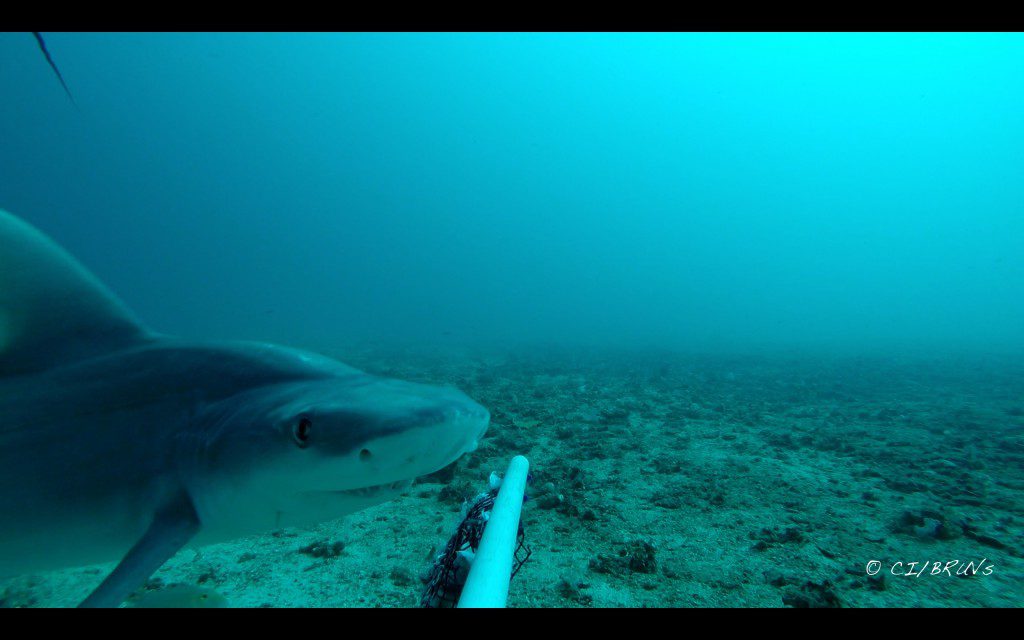 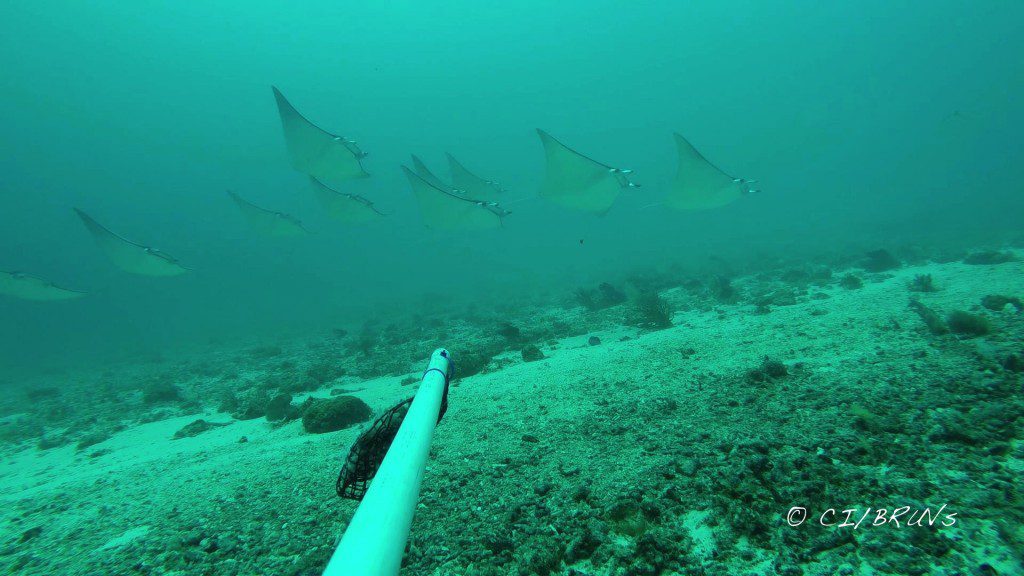 In addition to the sharks, many other interesting and unexpected appearances on camera included mantas, mobulas, eagle rays, golden cow-nosed rays, turtles, spanner crabs and moray eels. We were disappointed to catch many remora without hosts on camera… and have come up with a new slogan for a “Shark Savers”campaign: Save the Sharks – the ramoras are getting lonely! 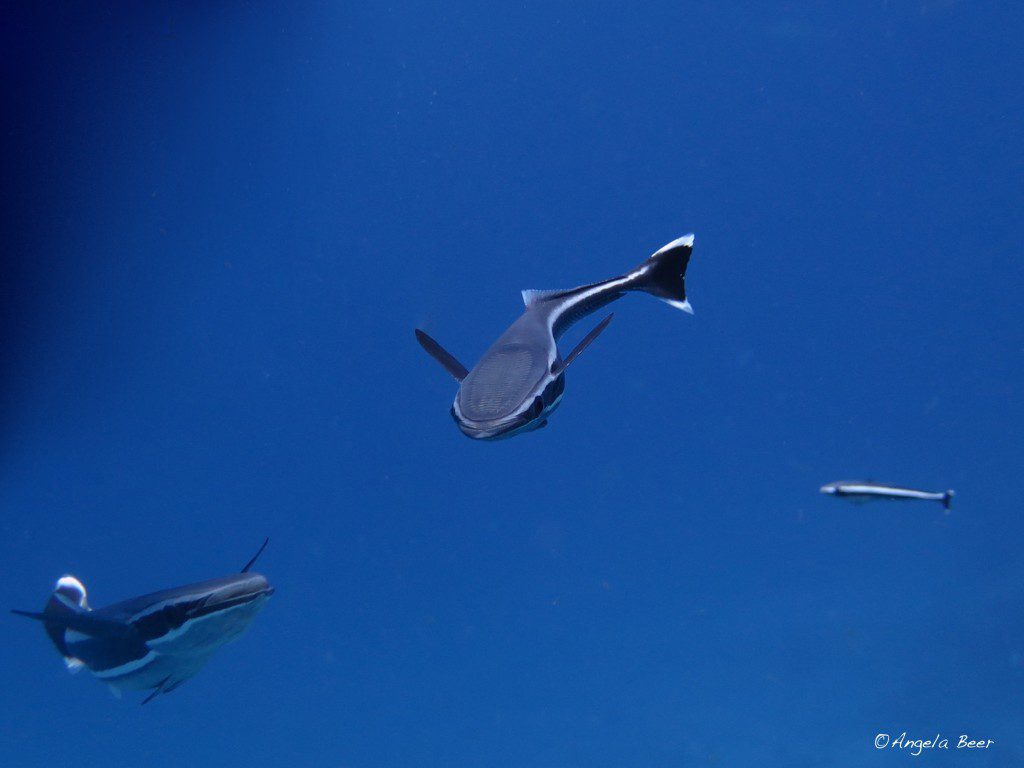 Onboard CI’s research vessel, the team also hosted the well-known TV presenter Riyanni Djangkaru and her Trans7 TV crew for two days, while they filmed our activities. Riyanni is actively supporting the nation-wide Save Sharks campaign, and we hope her effort to document the BRUV project in Raja Ampat will raise awareness throughout the country and be a positive force in the larger-scale shark conservation efforts.

Indonesia has the largest shark fishery in the world and is thus an important place to focus shark research and conservation efforts. The more we know about these cool, ancient animals, the better we can protect them.  We hope that data from these surveys will help the campaign to protect sharks on a national level – much the same way we were able to convince the government to pass national legislation to protect manta rays a year ago.

Angela Beer is a scientist, educator, and environmental management professional with over 15 years experience supporting conservation projects in Canada, the Galapagos Islands, Timor-Leste and Indonesia. In the BHS, Angela led the development of the Kalabia Marine Conservation Education Program in support of the MPA network and the BRUVs shark research program.

Jeff chats to… Jo Cutler, a contestant in the See You at the Sea Festival Film Competition (Watch Video)

Jo’s film – An Evolving Story – can be seen here:

Fifth in a series of six videos about the competition. Watch the first video HERE with Jenn Sandiford – Youth Engagement Officer with the Your Shore Beach Rangers Project and the Cornwall Wildlife Trust – to find out more about the Competition. Each day this week will be sharing one video in which Jeff talks with the young contestants about their films and what inspired them.

Ian and Gemma chat to Stephan Whelan.  Stephan is the Founder and Publisher of DeeperBlue.com. His passion for the underwater world started at 8 years-old with a try-dive in a hotel pool on holiday that soon formulated into a lifelong love affair with the oceans and led him to become one of the leading figures in the diving media industry.

Stephan got bitten by the diving bug early in life. His first scuba experience was a try-dive when he was eight years old on a family holiday in Europe, and from that moment, he was addicted. He learned to dive properly with BSAC (British Sub Aqua Club) as soon as he could at school and then did his BSAC Assistant Instructor when he turned 16. By the time he was heading to university in 1996, he was hooked on teaching and diving as much as he could.

By the time he started studying at university, he decided to have a go at flexing his web-design skills by publishing some of the stories he had built up about various ‘challenging’ students and dives he had encountered, and so deeperblue.net (as it was known then) was created. He published numerous personal stories until 1998 when other writers began enquiring about contributing to the site with their tales, and it was at this moment he decided to make it more like a magazine format and began asking for volunteer helpers. He got a couple of editors on board, and plenty of writers began contributing.

DeeperBlue.com (or DB as it’s become to be known) is now one of the most-popular diving websites in the world and has grown to publish over 9,000 articles covering all sorts of topics like Freediving, Scuba Diving, Ocean Advocacy, and Diving Travel all the while keeping over half-a-million passionate divers from the diving community connected every month through the forums, large social media following, mobile app, and recently launched podcast.

Find more podcast episodes and information at www.thebigscuba.com and on most social platforms @thebigscuba

WIN an Envirus Everyday+ Mask from Sharkskin – 5 up for grabs!!!

For this week’s competition, we’ve teamed up with our good friends at Liquid Sports to give away five Envirus Everyday+ Masks, which...

WIN a PADI eLearning Course – 5 courses up for grabs!!!

From 1-25 December, our good friends at PADI® will donate 10% of your PADI eLearning® purchase to support the Project AWARE® Dive Against...

For this week’s competition, we’ve teamed up with our good friends at Beuchat to give away an Air Light Bag!...

For this week’s competition, we’ve teamed up with our good friends at Liquid Sports to give away a Bigblue AL-1200NP Dive...

Get aboard Emperor Echo this Spring!

This is the perfect start to your 2021 diving season… and at an incredible lead-in price of just £885 per person.

Jump on board the latest addition to the Emperor fleet and enjoy diving the famous sites of the Red Sea with this fantastic special offer. This itinerary takes in the wonderful South & St Johns from 26 February – 05 March 2021.

Subject to availability – limited flight seats at this price so don't delay!

All this week on www.scubaverse.com we are sharing

We know you’d much rather be spending this #blue

Are you the winner of a brand new @momentumwatch M

Happy New Year from Team Scubaverse! Thank you for